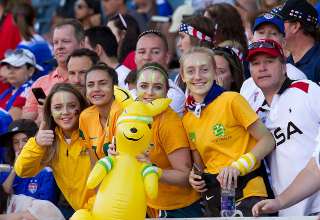 There was absolutely no way that the Canadian Women’s National Team was not going to be in a Group of Death.

Eight of the 12 national sides that were in the Olympic draw are currently in the top 12 of FIFA’s rankings. So, the process of mathematical probability told us before the Thursday’s draw that all three Olympic groups would be as tough as nails.

Canada will open the Olympics against No. 5 Australia. The group also features No. 2 Germany and Zimbabwe, the team Canada will be expected to beat handily — even though women’s national-team coach John Herdman cautioned that the level of soccer in Africa is rapidly improving.

Herdman compared Canada’s group to what the team faced at the 2012 London Games, where it finished with a bronze medal. In Canada’s group was No. 3 Japan and No. 5 Sweden.

But a lot will ride on that opening game vs. Australia. Canada may indeed get out of the group even if it loses that opening match — as three teams will advance from two of the three groups — but that game will also influence the seeding. The lower Canada finishes, the harder the route to the semifinals.

Canada hasn’t faced Australia very often; in 2015, Canada beat the Aussies 2-0 in a closed-door friendly. But Herdman said that game can’t be treated as a serious assessment of the competition.

Herdman, though, coached the New Zealand team before he took the Canada job. And his New Zealand squad faced Australia — a lot.

“When I was with New Zealand, they were the only team we could afford to play at the time, travelling over the ditch,” Herdman said.

And his assessment of the Aussies?

“They have a real fighting spirit, like the Canadians.” And, he says the Aussies can burn you with plenty of scoring threats around the park.

Of course, Australia was one of the darling teams at the 2015 Women’s World Cup, getting to the quarterfinals after knocking Brazil out of the tournament at the Round of 16 stage.

For the CONCACAF Championships, Herdman went with a very young group that included strikers Janine Beckie and Deanne Rose. A lot of veterans — including defender Lauren Sesselmann, who became the scapegoat for Canada’s World Cup quarterfinal loss to England, and midfielder Kaylyn Kyle — have been supplanted by the kids.

In 2015, the women’s program ran two teams; the “A” squad that went to the World Cup, and the younger squad that represented Canada at the Pan Am Games. This was done so the young charges would get real-national-team experience and then challenge to join the “A” group for the Olympics.

Herdman said the play of Beckie and Rose “is making it very hard for us to look outside of the current group.” But he said he has an “open mind” when it comes to the vets; they can play their way back onto the national side.

“They have to let their careers tell their story,” he said.

Kyle and Leon are with NWSL teams, but Herdman said in the case of veteran players, it’s up to them to find clubs and show they deserve another look. He said the Canadian program has already done lots for them in terms of helping them find clubs in the past — and developing their skills. Now it’s their turn to take 100 per cent control of their destinies.