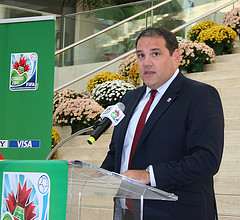 The second issue of Plastic Pitch, released today, features a 16-page section on Canada’s bid for the 2026 World Cup, with stories from five different writers.

(For those new to us, Plastic Pitch is our dedicated magazine for iPad, smartphones and Android readers — you can get either issue 1 or 2 or subscribe through iTunes, Newsstand, Google Play or Amazon, links at the bottom of the article)

But, there’s one part of that World Cup section that’s sure to get a lot of attention. And that’s the stated Canadian Soccer Association goal of an all-Canadian Division One — or “1A,” as CSA President Victor Montagliani called it in our interview.

Say it with me. An all-Canadian league. Division one, not two or three or four.

Over the last year, I’d heard whispers about the possibility of an all-Canadian Division One. But getting anyone to confirm that… well, that was the thing. It was like the Great White Whale. Now, it’s out there. Officially. The recognition that Canada needs its own league; that we can’t redefine our developmental pyramid unless a Canadian Division One — which puts the interest of Canadian soccer at the forefront — is at the top.

Now, before the message boards are filled with flame wars over the future of the shared U.S-Canadian pyramid, some context needs to be provided. The discussion about the possibility of a Canadian Division One came at the end of an interview I did with Montagliani about the 2026 World Cup bid. It was the add-on to a simple question: Does a country needs its own league in order to have a successful World Cup bid? Montagliani’s answer was no — it doesn’t. But then he said that he would really like to see Canada have its own Division One, anyway. Montagliani stressed that the league was an end goal to itself, and not part of the bid. And, most importantly, that this was a long-term vision, not something that was going to happen tomorrow. For a Canadian Division One to hatch, it would need investors. It would need broad-based support.

Really, we’re at the stage where the toe is wiggling in the pool, seeing if the water is warm enough to go in.

Still, the fact that the CSA president says that he has a goal of seeing an all-Canadian Division One come to pass. Well, that’s news. Big news.

And, there wasn’t any hostility in the conversation. Montagliani was clear that this concept wasn’t mean to trip up MLS or NASL’s work in Canada. He used the term “co-exist” to describe the relationship that would/could evolve between 1A and the American-based leagues that have teams in Canada.

As the person who conducted the interview, I need to be fair to my subject — and knowing how a passionate soccer community can jump on news like this, I wanted to make sure we all have clear heads going into this. So, make sure this is clear: This isn’t about leaving MLS or NASL. It’s about creating a new professional pathway.

So, now that the “context” is handled, we can discuss what a national Division One could mean.

We know that MLS has no real interest in having its Canadian content go any higher than three clubs. Commissioner Don Garber has made it clear that the current expansion plans don’t include looking north of the border. The question is, can Canadian soccer really grow to what it needs to be with just three first-division clubs?

We all know the answer to that.

This isn’t to knock MLS. I don’t want people to think that this site or the publication is anti-MLS. It’s not. But we need to understand and accept what MLS is: An American league, which allows three Canadian clubs to participate in it. When Garber or other MLS officials speak to the gathered media, they speak about what MLS can do for “our country” (as in the United States, singular) rather than “countries.” When Don Garber was recently in Montreal, he chatted with the media about the problems the league was having in getting a stadium approved in Miami, not about making the Canadian national program better.

Canadians should see our participation in MLS as a simple business transaction.

What MLS gets out of the deal? In Toronto FC, the league got the franchise that, along with Seattle, acted as the catalyst for what we call MLS 2.0. In Vancouver and Montreal, the league gets teams that finish near the top of attendance lists. The MLS TV numbers, per capita (in English) are better in Canada than the U.S. The Canadian economy continues to outperform the American economy; even though we are a smaller country with fewer consumers, we offer sponsors a better likelihood, per capita, that their products will be seen by affluent potential buyers.

The Canadian part of the bargain? We got the chance to kickstart a Division-One process, to get pro teams which would create academies and nurture talent. The next part of that equation, though, is where MLS hasn’t lived up to its part of the bargain, yet. (And we stress, “yet.”) And that’s Canadians actually getting minutes in the league. Based on the numbers, Canadian minutes played in MLS — on a per-team basis — are about the same in 1996 as they are in 2013 (we showed this back in the first issue of Plastic Pitch)

Anyone who tells you that “Canadian minutes are up” simply because there are more teams in the league is a charlatan. Of course there are more total minutes played by Canadians now than there was back then. There were 10 teams then, there are 19 now. There are more jobs available.

But the only real measure, when it comes to seeing how Canadians are being treated in MLS, is to look at the minutes on a per-team basis. And they really haven’t changed. In fact, they have been on a downward trend since Vancouver and Montreal joined the league. In 2013, the number of minutes played by Canadians, per team, worked out this way. On average, each MLS team gave less than 12 full games playing time to one Canadian player.

A Canadian league is desperately needed on the development side. But, let’s face it; outside of the Canadian Football League, we have a unique problem. Because we have such massive neighbours to the south, in terms of international importance and media, we consistently judge ourselves by American standards. For us, playing in a league that has teams from Los Angeles and Houston and Chicago and New York gives us stronger feelings of legitimacy than a league that has teams from Saskatoon, Winnipeg and Halifax. It’s an understandable national complex, as most of our population lives a short drive from the American border. Heck, most of our “original” Canadian TV programming are simply copies of foreign reality shows, repackaged in Canada. So You Think You Can Dance Canada, Amazing Race Canada, Master Chef Canada… The number of Canadians who live in Los Angeles is in the hundreds of thousands. Think about it: For most of us, moving to L.A. will be a more realistic future than moving to Winnipeg or Regina or the Maritimes.

So it’s easy to see how we lose the ability to define ourselves. It probably explains why we are so damn protective about hockey. It’s the one thing we identify as ours, even though we know that a “World” championship means we really are better than just six or seven other nations that really care.

So, the current MLS deal is good for soccer fans in Canada’s three major cities: But, in a very provincial way, it shuts the rest of Canada out from the first-division dream.

Right now, the best anyone can hope for is to have their city join FC Edmonton and Ottawa in NASL. And NASL is still a massive financial commitment for an entrepreneur. Constant road trips to the American south. Keeping up with the payrolls of Minnesota and the New York Cosmos. You need to post the $750,000 guarantee and have net worth in the millions.

So, we need a third way — not just MLS and NASL.

But, the Whitecaps, TFC and Impact don’t deserve to be punished for their successes. Same with the Ottawa Fury and FC Edmonton.

And, in no way should a new Canadian league depend on the stick rather than the carrot.

There’s no need to burn bridges here. We need to redefine ourselves (some would say “define”) as a soccer nation. But we can’t subject the five existing teams to some kind of ultra-nationalist scorched Earth policy. If any existing pro team moves to a Canadian league down the road, it should be because it’s what the fans and the front office wants — not because the team was forced to go.

Yet, there are some other issues. If Canada sanctions a “Division 1A,” how would this country’s lone spot in the CONCACAF Champions League be awarded? Let’s face it, if we have our own internationally recognized Division 1, choosing to not award the spot to the champion of said league would be kind of… odd.

The hope would be, down the road, is that by having a Division 1, and also having teams in U.S.-based leagues, CONCACAF would allow Canada to have more than one spot in the CCL. That would solve the problem — one guaranteed spot for Canada’s Division 1 champ, then another spot to the winner of the Voyageurs Cup, in which MLS and NASL and other Canadian teams compete.

But, right now, a national top league just a dream. A dream, though, that has been identified by the CSA. A dream that has a “1A” name. And for Canadian supporters in Regina and Winnipeg and Halifax and Calgary and Hamilton and Quebec City and Victoria, it means the possibility of having a Division 1 soccer club to support, without having to watch MLS on TV to get it.

And that’s a far more noble goal than the status quo.

Oh, and if anyone cares, I think Canada League 1 has a nice ring to it. CL1. Sounds a bit better than “1A.”

WORLD CUP 2026 IN CANADA? OUR OWN DIVISION 1A? READ PLASTIC PITCH TODAY.
(Also available for Android devices at Google Play)