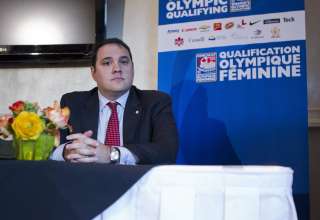 Victor Montagliani, the odds-on favourite going into this weekend’s Canadian Soccer Association elections, got the support he needed at the Annual General Meeting in Ottawa and is the new president.

Montagliani, who got a public show of support from Canada’s alumni players, defeated incumbent Dominique Maestracci and Rob Newman, a reformer who had the support of Canada’s four major pro clubs.

“Governance is not simply about management. It requires leadership, passion and a burning desire to deliver excellent outcomes for the Canadian Soccer Association. Leadership is about service and I am ready to serve the Canadian soccer community,” said Montagliani in a vision statement that was released by the CSA.

Montagliani has served three terms as CSA vice-president and is seen as a reformer, with an emphasis on fast-tracking the development of Canadian talent — and a supporter of the increase of the number of Canadian players on domestic pro clubs. You’d have to wonder how relations between Montagliani and the clubs will be in the coming weeks, considering that Toronto FC, the Montreal Impact, Vancouver Whitecaps and FC Edmonton made a very public show of support for Newman.

For interested parties who didn’t have votes, you had to rely on Twitter and a CSA press release for the scuttlebutt surrounding the event. And, cyberspace was filled with allegations that Saturday morning’s meeting were filled with backroom deals and vote arranging. Again, because this was a closed meeting, we have to be careful and make sure to use the word “allegations.”

That’s problem No. 1. Let’s take soccer out of the political equation for a second. If any government department, partially funded by taxpayers, closes itself off to public scrutiny, there should be hell to pay. And this is why the argument on how to make the CSA more transparent has to be taken out of the soccer circles; it needs to be brought up with MPs and the Ministry of Sport. It needs to be couched in the argument that “hey, I am a taxpayer. That makes me Victor Montagliani’s boss.” The CSA still exists in a ‘70s bizarre Trudeau environment based on the political ideal that Ottawa knows best, and can tell everyone else what to do. And, of course, if any of your registration fees go to the CSA, your moral right to know about the election process only increases.

So, having the doors closed to interested parties is ridiculous and not becoming of a government department.

Problem No. 2: The fact that voting actually takes place at the AGM. How do you get backroom deals? By having all of the delegates together and providing them with plenty of backrooms in which to do business. Sure, have an AGM to approve a budget and go over matters of national importance. But many political parties have gone to the online voting model. That’s the way the CSA should be conducting its balloting, with the voters available to log in to a secure site to cast ballots. Of course, it we made that change, we’d move to one member, one vote — rather than having the associations vote in blocs. (And, it would make part of the argument on how to change problem No. 1 moot… but that’s a good thing!)

As well, if the vote is conducted online, the candidates would need to travel to meet with the members, which would also help take the blinders off we see in so many organizations like the CSA.

Yes, that’s inconvenient. But living in Canada is inconvenient. We are the second-largest country in the world with spread-out cities. So, if you wanna be president, you need to get used to being on planes.

Hopefully, Montagliani will be the agent of change that so many hope to see. But, one of his first orders of business should be to change the process.