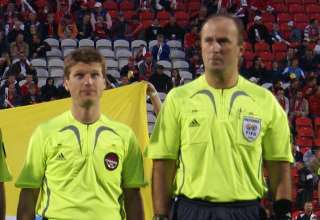 Major League Soccer has pledged to a lot more to aid the professional development of its referees — but it will not tolerate extended protests from players and coaches.

As part of his online “March to Soccer” season kick-off address and press conference, MLS Commissioner Don Garber said the number of full-time referees used by the league will move up from three to nine. The officials will all work under the umbrella of the Professional Referee Organization (CLICK HERE). Those full-time referees will go through 18 three-day consultation periods during the season.

The program will work with the cooperation of the Canadian Soccer Association and the United States Soccer Federation.

Garber said the referees will develop with “better training, better assessment, better use of technology.”

But, even though the referees will receive more professional support, Garber doesn’t want fans to take that as meaning that the league thinks it has an officiating problem. In fact, he said that when the league reviews video of controversial calls, they find that a lot of times, the fans were wrong and the referee was right.

But, Garber warned that the league is planning to crack down on coaches who bully officials from the sidelines, and coaches will also be held responsible if their players crowd the official after he makes a call. By now, we’ve got (unfortunately) used to seeing players waving imaginary cards after a hard foul. We have grown accustomed to having two- or three-minute delays after a penalty call is made, as the referee has to deal with protest after protest. The league has now stated it will crack down on these occurrences, so it will be interesting to see if more cards are handed out for jawing at the officials, or more coaches receive fines for making scenes on the sidelines.

Of course, former Toronto FC assistant Bob de Klerk and, before him, coach John Carver received their fair shares of discipline for their protests against the officials.