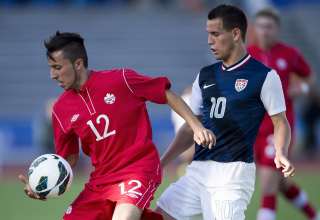 For about five minutes in the first half, Canada was in position of getting into the draw for the 2013 FIFA under-20 World Cup.

But after jumping in front, the back-line shut off and turned out a performance that couldn’t handle an American side that capitalized on just about any mistake the Canadians made.

In the end, Canada saw its World Cup dreams dashed with a 4-2 loss to its most hated rivals Tuesday night in the quarter-final at the 2013 CONCACAF under-20 Championship in Puebla, Mexico.

“We just never got our foot on the ball and tried to play,” said head coach Nick Dasovic. “We kept hitting the long ones and it’s difficult to as a striker that’s playing on his own to fight against two or three guys — and that’s just the way it goes.”

In the 23rd minute, Dylan Carreiro gave Canada a dream start when he lashed in his right-footed shot from about 25 yards away. Carreiro was mobbed by his teammates in the corner and all the substitutes came to the sidelines to salute the goal.

But just six minutes later the Americans started to exploit a Canadian back line that just wasn’t able to handle the challenge on the night.

First Daniel Cuevas won space on the left before sending a cross towards Luis Gil.

Gil—who was given was too much time and space—controlled the cross and put a left-footed shot past Maxime Crepeau, who kept the game close with some spectacular saves in the second half.

With the defence already looking vulnerable, captain Doneil Henry went off not long after with what appeared to be a hamstring injury. He was later seen hobbling slowly towards the team bus.

With five minutes left in the half, Mario Rodriguez put in another cross from the left side that Jose Villareal got to first to put the ball home from close-range.

Badly needing to get to halftime, Canada conceded again in first half stoppage time. On a corner that Crepeau probably should have tried for catch, he opted instead to punch and William Trapp was more than willing to try to smash home from long range.

Though he was helped by a deflection, the Americans were up by two heading into the break.

“We stuck to our game plan and we were quite happy with it then you let in two easy goals where they really didn’t have to work hard for them,” said Dasovic. “The third goal kind of kills you just before halftime.”

Keven Aleman came on at the half as Canada needed to find something quickly and nine minutes into the second half, some hard work perhaps should have been rewarded with a penalty.

After a scramble in the box, the ball ended up on Samuel Piette’s feet and it looked a cut-and-dried penalty as his legs were taken out from under him. But the referee, Javier Santos of Puerto Rico (a United States territory), who also was in charge of the Canada-Nicaragua game last Friday, waved play on.

“I was right there and (Piette) took one touch and the other guy just hit him on the leg,” said Carreiro. “We all thought it was a penalty. We were all arguing for it but unfortunately the refs never gave it.”

While the Canadians may have a beef with the referee on that play, they can’t blame him for allowing the United States to counter quickly and allowing Villareal all kinds of space to place his shot and put the U.S. up three goals.

To its credit, Canada tried to respond and in the 64th minute off a corner kick, Piette got one back with a sizzler from 30 yards out in what is becoming a familiar sight with the midfielder. He scored in much the same way against Nicaragua on Friday and against this same U.S. team last October in the Marbella Cup.

Not long after, Aleman was played through with an inch perfect pass on the right side but he was perhaps unprepared for it and perhaps it was the pitch but was a glorious chance for Canada instead went out for a goal kick.

Forward Caleb Clarke also had a chance late but his curling right-footed shot just went wide of the post.

So now as Canada missed out on the Under-20 World Cup for the third consecutive time, the biggest loss in all this is the missed chance at Canadian players getting experience at the highest level internationally.

“The sad thing about not going to the World Cup is the fact that we don’t get five extra games now — including two CONCACAF games and then the three guaranteed (at the World Cup),” said Dasovic. “That’s five that are guaranteed in this calendar year so that’s the biggest tragedy for me for not qualifying.”