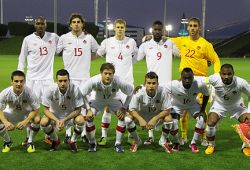 Canada’s friendly Monday against Belarus in Qatar wasn’t available on any traditional broadcast or streaming media.

So, what can we take from the 2-0 loss to the Belarusians? Well, there was this tasty tweet from the Canada Soccer feed right after the match: “Match saw some more nasty challenges and a near brawl before its conclusion.”

Neither the Canadian Soccer Association nor the Belarus Football Federation mentioned the incidents in their match reports. But highlights, courtesy of the BFF, can be found here.

We also know that Belarusian coach Georgy Kondratiev was tossed for arguing an offside call.

As for the goals, it looks as if interim coach Tony Fonseca’s words about Canada’s need to eliminate mistakes from its game, made after last week’s 2-1 loss to Japan, went unheeded. Belarus opened the scoring when Vitali Radzionau was left open in the box to nod home a free kick. The second goal came late in the second half, when keeper Tomer Chencinski, making his first start for Canada, and defender Dejan Jakovic looked to have got their signals crossed on who would deal with a bounding ball in the box. Uladzimir Khavaschynski got goal side of Jakovic, pounced on the ball and nodded it over the Canadian keeper.

“It was frustrating,” he was quoted on the Canadian Soccer Association’s website. “We lost 2-0 and that doesn’t tell the story of the game. I thought we played well, controlled a large part of the possession and created chances. But that’s football…
Wha could the brawl have been about? Since we don’t have video evidence, we can’t say for sure. But, for fun, we can cite the Government of Canada’s current status on its relationship with Belarus.

“Canada limited its official relations with Belarus following the flawed 2006 presidential elections, which included the harassment and intimidation of the opposition, and the subsequent suppression of protests by Belarusian authorities. Official representation to Belarus (based at the Canadian Embassy in Warsaw) was downgraded by suspending the accreditation process for three consecutive Ambassadors. In addition, Canada has restricted official contact with Belarusian authorities to the areas of consular relations, human rights and democratic development, and efforts related to international security.

“Belarus’ presidential election held December 19, 2010, was marred by a lack of transparency in the vote counting process, a violent crackdown on protestors, and the detention of most opposition presidential candidates. Canada’s Minister of Foreign Affairs issued twelve statements on the election and its aftermath expressing disappointment at the conduct of the Government of Belarus during the election, condemning the violence following the election, calling for the release of detainees including opposition presidential candidates, and expressing disappointment at Belarus’ decision to close the Minsk office of the Organization for Security and Cooperation in Europe.

“Canada’s Minister of Foreign Affairs also expressed disappointment with the flawed results of the most recent parliamentary elections in Belarus held September 23, 2012, and repeatedly urged the Belarusian authorities to uphold democratic principles, respect for human rights and the rule of law.”
Basically, we don’t have an ambassador in Belarus, we are critical of their government and Monday’s match probably did little to further relations between our countries.