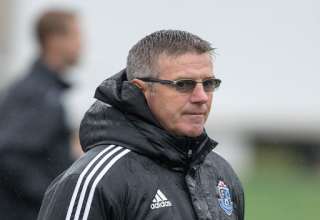 FC Edmonton got through the first week of the season with just 15 players on the traveling squad that went to Rayo OKC.

With the departure of fullback Eddie Edward, centre back Mallan Roberts on loan to Ottawa, and with Ritchie Jones’s knee injury forcing him to leave the club, the team has some spots to fill. And Jones’s departure means that the Eddies also have a free international roster spot. It’s a spot that coach Colin Miller intends on filling.

“I am speaking with a couple of agents about the international spot, of course, that has become available through Ritchie Jones leaving the club,” said Miller after Tuesday’s training session. “And there are one or two other options that we’re working on. But, as you know, as soon as the transfer window opens every agent in the world has got the next Messi. It’s sifting through who we believe is going to be right for us.”

Miller has said that he won’t bring in any player who offers the same skills sets as someone already with the club. He said there’s no point in having 30 men on the roster if only 15 of them have a hope of seeing the field. And he said that he has to respect the fact that FC Edmonton have a budget — even though the owners Tom and Dave Fath have never refused a request from Miller to sign a player.

As well, former Jacksonville Armada defender Shawn Nicklaw continues to trial with the club. Miller said that a decision on Nicklaw should be made between 24 and 48 hours from Tuesday.

As well, Miller would not confirm nor deny that the team has shown interest in Canadian defender Maxim Tissot, who was waived by the Montreal Impact last week.