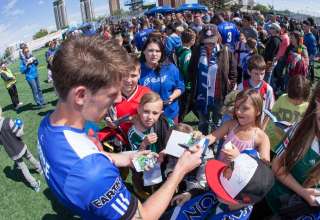 The leading scorer in FC Edmonton’s NASL history won’t be with the club when it plays its first Canadian Premier League match next April.

Daryl Fordyce, who got his Canadian permanent residency during his time in Edmonton, and whose son, Luka, was born in Canada, is not only the club’s all-time leading scorer, but is tied for fifth all time in Voyageurs Cup goals — at least since the national championship adopted the tournament format.

But, while FCE preps for its debut season in CanPL, Fordyce is back in Northern Ireland.

When asked about Fordyce, FCE coach Jeff Paulus took a “never say never” tack, but confirmed that the player won’t be wearing Eddies blue in 2019.

“Certainly you want to look at good players, and Daryl is that,” said Paulus. “But things just aren’t going to work out for us for this upcoming year. But in the future, you never know. I certainly wish Daryl all the best, he’s the club’s leading scorer. This club owes a lot to Daryl Fordyce. But this is a different model that we’re bringing into play here, so changes have to made.”

As well, Paulus was asked about Edmonton native Tosaint Ricketts, who is currently unattached after parting ways with Toronto FC. While Ricketts is on a lot of FCE fans’ wish lists, Paulus said that the player is too pricey for the Eddies’ budget. He said, tongue firmly in cheek, that the team would need a sponsor would come in and cover $100,000 for a Ricketts contract offer.

Paulus said that, while no player announcements have been made as of Wednesday, that the team only has a few roster holes left to fill.