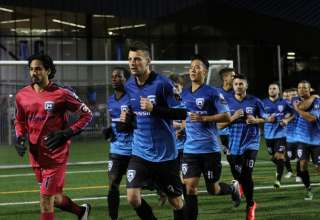 The auditions were a bit different. The first time through, the hopefuls for 21 Thunder were asked to do the usual stuff; go through scenes, show their acting ranges. But, the second time through, they had to show the producers that they could play soccer.

The producers of the new Canadian series, which debuts July 31 on CBC, didn’t want to use extras for the on-field action scenes. So, when the ball is in play on screen for this soccer drama, the actors had to be ready to play the game.

The show is set in Montreal and focuses on the travails of the U-21 side affiliated with the fictional Thunder franchise that plays in Major League Soccer. There’s the star player who looks to escape gangland Montreal; the hotshot Ivorian import who is desperately searching for a lost family member; there’s a match-fixing storyline, too.

(There’s also a nod to the infamous six-second rule that cost the Canadian women’s team at the 2012 Olympics.)

If those plots seem far-fetched, you haven’t been around Canadian soccer long enough. In the last few years I’ve covered a match-fixing scandal in the Canadian Soccer League and have been to court to follow a former NASL player accused of trafficking drugs. Yes, the show squeezes as much drama out of the plotlines, but the writers are getting their ideas from the real world.

Throw in the tension of a former Canadian women’s soccer star who is named an assistant coach and an aging Scottish hard man who is brought in as a Designated Player who also works with the U-21s, and you have many complex threads to weave.

Show producer Kenneth Hirsch said the timing for the show is perfect; soccer has never been as popular in Canada. And the CBC is looking for original content that doesn’t originate in Ontario — the network is sensitive to the notion that its focus is far too narrow on southern Ontario.

“We wanted to do a show about sports that was one step away from the major league,” said Hirsch. “That world really hasn’t seen a lot of drama made about it.”

And, because it’s a soccer drama rather than a hockey drama, there is a better chance of selling the show to overseas networks.

And soccer’s popularity with millennials couldn’t be ignored.

“Millennials have huge dreams, and we feel that this a world that resonates not only with Canadians, but international audiences as well,” said Hirsch. “It was the perfect lens to tell great stories.”

And the actors are required to, well, play the game. No doubles. As well, Ryan Pierce, who came up with Aberdeen and played for Kilmarnock and, later, the USL’s OC Blues, is in the cast. He plays Davey Gunn, the hotshot import with a penchant for hard liquor and women. Pierce is the nephew of former Arsenal star and Leeds United manager David O’Leary. His father is former Ireland international Pierce O’Leary. (Pierce, when he still used the O’Leary surname, trialled with the Whitecaps six years ago).

Another focal point is the character of Junior Lolo, played by Emmanuel Kabongo. He signs with the Thunder despite other lucrative offers — and brings his younger brother with him from the Ivory Coast.

“A question in the show is why he would choose a team in Montreal over a team in Europe,” says Hirsch.

Hirsch knows that many viewers will think that he and writers Riley Adams and Adrian Wills would have been influenced by Didier Drogba’s arrival with the Montreal Impact. But, in fact, the Junior Lolo character was conceived before the Drogba signing.

I’ve had the chance to screen the first several episodes. Without revealing any more than I already have, I can state that it’s pure candy for the Canadian soccer follower. Yes, it’s unabashedly over-the-top, but that’s what we’d expect from a TV drama. There’s a dose of sensationalism, a good dose of sex and some drugs to amp up the tensions. It’s fun. And that’s what soccer should be, right?