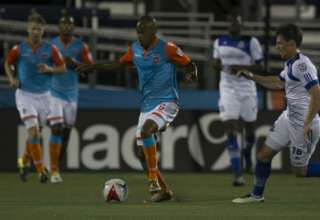 Martinez’s goal gave cellar-dwelling Miami FC a 1-0 home win over the Eddies. The New York Cosmos beat red-card plagued Rayo OKC on Saturday, and now lead the Eddies by four points. The Eddies have just one game left in the spring season.

FCE supporters can only wonder how this game could have been different had Gustavo been able to put his clear header on goal in the third minute of the game. The Brazilian midfielder found space between two Miami defenders and had a clear view of goal. But his headed effort went off the outside of the post when it would have been easier to score.

Tomi Ameobi also had a decent first-half chance for the Eddies, he was able to win a ball in front of two Miami FC defenders in the penalty area. He was able to spin and shoot, but sent the ball wide.

Miami’s Dario Cvitanich forced FCE keeper Matt Van Oekel into a save with a decent free kick attempt a little over midway through the second half. But, that was as close as Miami, boasting the league’s worst offence, got to scoring through the first 45 minutes.

The Eddies created a decent chance early in the second half. But Nik Ledgerwood, who will leave for Canadian national-team duty on Sunday, put a half-volley effort just over the bar.

The Eddies had a shout for a penalty in the 63rd when central defender Pape Diakite, who had joined the attack for a set piece, went down close to Miami’s Blake Smith. But the replays showed that Diakite was leaning into Smith, and the FCE defender received a yellow card for simulation.

That’s not to suggest that referee Jaime Herrera had a particularly good night. He missed a red-card-worthy studs-showing challenge from Cvitanich on Ledgerwood; and, to add insult to injury, he decided to give the FC Edmonton player a yellow because Miami FC’s forward hit the deck in the challenge.

“It says a lot when I don’t shake a player’s hand after the game,” Miller said of Cvitanich. “He spent the game flopping. But that’s not the reason we lost the game. We lost because we were flat for two-thirds of the game.”

But, there was no controversy on the winning goal. Facing two defenders, Martinez opted to shoot though he was well outside of the penalty area. The ball rocketed into the top corner — and FC Edmonton’s spring-season challenge was ended. “It was a strike worthy of winning any football match,” said Miller. “But I have to say that the defending leading up to the goal was poor.”