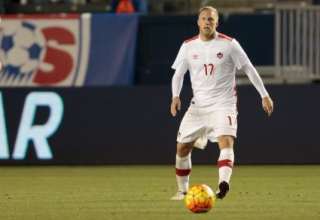 Marcel de Jong’s departure from Sporting Kansas City and short-term deal with the Ottawa Fury were only announced earlier this week. But the Canadian national team winger/fullback knew for months that his MLS odyssey had come to an end.

After a decade of pro soccer in Germany and the Netherlands — and carrying years of international football experience, de Jong was expected to carry a major load for SKC after he signed there in 2015. But, after seeing regular starts early in the season, he was relegated to squad duty. In the end, he played just 13 games and got just 847 minutes of MLS action.

And, to this day, he says he isn’t sure why he fell out of favour with coach Peter Vermes.

“I thought I did OK, especially at the beginning of the season,” said de Jong. “But, for some reason he decided he didn’t want to play me anymore. But, that’s his decision.”

At the end of the 2015 MLS campaign, de Jong met with the coach and it was clear that the team didn’t want him back. He started looking for options; he said he had a few to juggle, but joining the NASL’s Ottawa Fury — where fellow national-teamer Julian de Guzman is plying his trade — was his best option.

Even though he’s been at Ottawa’s camp since the outset, the termination of his SKC contract and his new Fury deal were only just announced. The Fury deal only lasts till the break between the spring and fall seasons, so de Jong can look for a new club in the July transfer window. In fact, his wife and daughter have remained in Kansas City.

He knows the Fury got to the NASL championship game last season. He also knows the team has been gutted and rebuilt under new head coach Paul Dalglish. So, de Jong can only judge the team by what he’s seen so far in cao.

“I think this is a very good group, a good coach, good training staff. So far I think what the coach is doing is very good, I like what he’s bringing to training. He knows what he’s doing. And we have a couple of young players, a couple of older, experienced players. We really have a good mix of guys.”

But de Jong says his decision to come to NASL wasn’t influenced by de Guzman’s presence in Ottawa or the fact that Nik Ledgerwood, another veteran national-teamer, has signed with FC Edmonton. De Jong said that Ottawa was simply the best fit.

No matter their reasons for coming to the league, the NASL will likely get great PR mileage from the Canadian roster for the huge March 25 and 29 games against Mexico. It will likely feature de Jong, de Guzman and Ledgerwood.

“Really, these are the biggest two games of the year for us,” said de Jong. “For Canada to get a result at home, or even away, it’s going to be huge for us. We’re all really looking forward to it.”