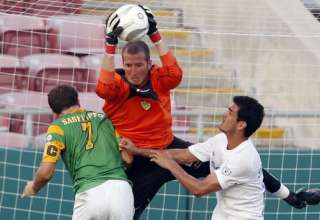 Chris Kooy had two great chances to get FC Edmonton a last-gasp equalizer in Tampa.

After being denied by an outstanding piece of goalkeeping by FC Tampa Bay’s Jeff Attinella with his first chance, Kooy was able to score in injury time, canceling out Chad Burt’s opening goal in a 1-1 draw.

With just a little less than 10 minutes Dan Antoniuk won a long ball lofted in the penalty area, and laid if off for Kooy. His low drive was headed just inside the left post, but Attinella got his fingertips to it, tipping the ball away from goal.

“It was going in,” said Kooy. “I didn’t think the keeper was getting to it, but he made a great save to tip it past the post for a corner.”

Antoniuk spurned his own chance to equalize, missing the goal from six yards away.

But, deep into injury time, FCE got a free kick in the FCTB side of half. Alex Surprenant delivered the ball into a very crowded box. Paul Craig got to the ball first, nudging it across the face of goal, where a wide-open Kooy simply could not miss.

The draw gave FC Edmonton 10 of a potential 18 points so far this season.. But five of the club’s first six games have been on the road.

FC Edmonton enjoyed the bulk of the possession through the first half, but the defence switched off early in the second half. A lofted ball into the area was won by the home team, and the ball was eventually allowed to hit the grass; Burt, left unmarked got to the ball off the bounce and rifled home a left-footed half volley, giving keeper Lance Parker no chance.

“It was sloppy,” lamented assistant coach Dave Randall. “We had a throw-in in our end, we gave the ball away. They put the cross in, had a man wide open at the back post, who got it back to another wide-open man. It was sloppy defending on our part; it was sloppy play in our own end.”

Parker started his third consecutive game for FC Edmonton even though Rein Baart, who started the first four NASL games for the club, was back from his red-card suspension. He was excellent again, and looks to have taken the No. 1 job away from the Dutch veteran, who struggled in his last three games between the pipes.

Key words are “looks to have.” Because Randall said the team has no clear No. 1 choice.

“No one has a job, yet,” said Randall. “It’s not his job. We now have 10 days off and we will see how things get sorted out. And there are still a lot of games to be played.”

Parker kept Edmonton in the game when he made a point-blank save on a shot from Haitian striker Pascal Millien.

FCE dominated possession early, and created the best chances of the first half. But Craig sent a shot over the bar and a partially deflected attempt from Sam Lam slid just outside the post.

Edmonton did well to establish a short passing game within its 4-3-3, forcing Tampa Bay to chase them for long stretches.

“I’m happy with the one, but we should have got three,” said Randall. “We didn’t finish our chances. But, at the start of this road trip, if you would have said you would get four of a possible six points, I’d have taken it. We went for the three, but got the one tonight.”

With the addition of the Nutrilite Canadian Championship match last Wednesday in Toronto, this was three-game trip for FCE.

The club will now have almost a full two weeks off before hosting NSC Minnesota Stars on Victoria Day.

“We have got the two longest road trips of the season out of the way,” said Kooy. “Now we can come home and we have a few days off to prepare. We want to make amends for our home opener (a 5-0 loss to the Montreal Impact). Now we can rest and get some injured players back.”

“It’s a tough way to start the season,” said FCE midfielder Shaun Saiko before the game in Tampa. “It seems like we are playing two games every week. I think we’ve had the toughest schedule in the league so far. It will be nice to get home and have two weeks.”