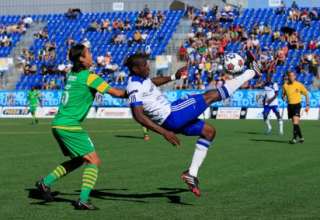 During the first half of Sunday’s match between the Tampa Bay Rowdies and FC Edmonton at Clarke Stadium, NASL Commissioner Bill Peterson came into the broadcast booth and compared the two teams to heavyweight fighters. They were pushing each other, feeling each other out, looking for weaknesses.

And, like many heavyweight bouts, one punch changed the fortune of the fight. And it was a left hook from Lance Laing that sent the Rowdies to the mat. (OK, it was a left-footed shot, and it sorta hooked as it went into the net… but I’m trying to work an analogy here. Sue me.)

Laing’s second-half goal was the difference as the Eddies beat the Rowdies 1-0 in front of an announced crowd of 4,392 at Clarke Stadium.

It came off a goal kick that Rowdies keeper Matt Pickens struck into a stiff 30 km/h wind. Laing won the ball on the Rowdies’ side of half, and played it to teammate Neil Hlavaty. Laing continued his run, Hlavaty spotted it, and then lofted a ball behind the Tampa Bay backline. Laing beat defender JP Rodrigues to the ball then unleashed a left-footed drive the Pickens couldn’t stop.

It was the exclamation mark on a scrappy game which saw the wind play havoc with the teams. It looked to affect the Rowdies more than the Eddies. Tampa Bay won the toss and decided to take the wind in the first half, which led to 45 minutes filled with long balls played out of the reach of the strikers. The Rowdies couldn’t adjust to how strong the wind was at their backs, and played ball after ball that ended up as goal kick after goal kick. At halftime, Rowdies coach Ricky Hill lamented how the wind advantage had made his team “too impatient.”

Still, the Rowdies got one great chance; and it didn’t come off a long ball. Beto Navarro, playing at right back for the Eddies made an ill-advised back pass that was intercepted by Tampa’s Blake Wagner. But FCE keeper John Smits came off his line, took away the angle, and made a great save.

In the second half, Smits was called upon to make a great save to preserve the win. Tampa’s Lucky Mksoana’s pass was deflected by Luciano Olguin towards goal, but Smits went into a butterfly pose, almost like a hockey goalie, to block the chance.

FCE Coach Colin Miller admitted that the game wasn’t the prettiest to watch, but it showed the home team’s resolve.

“You have to be committed to the job that’s required.”

And, after giving up a poor goal to Indy last week, Smits’ performance was proof that commitment.

While Miller was still critical of his keeper’s distribution (“he kicked it out to the bagpiper a few times in the first half”) he praised his keeper for the saves. “If you’re a keeper, your first job is to keep the ball out of the net.”

And while Laing got the glory, some unsung hero awards need to go to Eddie Edward, who moved from his regular right back spot and played 75 minutes as a holding midfielder, as the Eddies coped with injuries. And Kareem Moses’s play at left back is what allowed Laing to be able to roam up and down the pitch.

Miller said that Moses’s improvement since he came to the Eddies last February has been remarkable.

“For big Kareem, the standard here is far more consistent. But he’s very coachable. And he just cares so much about the club.”