Brazilian striker Julio Cesar da Silva Rodrigues, on loan to FC Edmonton from Palmeiras, will remain in the city for the remainder of the NASL season to train with the club.

“Train” is the key word, here. Not “play.” After some back and forth between the club, the Canadian Soccer Association, the Brazilian Football Federation and FIFA, Edmonton has learned that the forward’s paperwork didn’t get completed in time to beat the deadline to be eligible to play in NASL in the final couple of months of the season.

Club officials had a meeting Saturday morning to discuss the Brazilian’s status, and there are simply no more avenues to appeal. 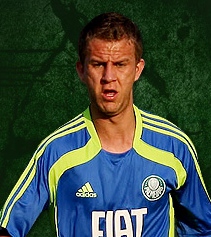 As FCE club officials have explained to The11.ca, when the forward was brought in, the paperwork was forwarded to the Brazilian Football Federation and Canadian Soccer Association’s offices before the deadline, in late July. But the paperwork that has to come from the CBF and the CSA to the FIFA offices didn’t get there until a couple of hours after they needed to be there.

Now, the team is looking to extend Julio Cesar da Silva Rodrigues’ loan through the 2013 season, so he can keep training with the Eddies in the off-season and play when NASL kicks off again next April.

But the Brazilian will remain and train with the club, and FCE will cover its undisclosed portion of the salary. But, in terms of 2012, FCE will not have another attacking option — which puts more pressure on Chilean Yashir Pinto (three goals this season) and the other forwards to improve upon the league’s worst offence, which is averaging less than one goal for per game.

FCE trails Carolina by seven points for the final playoff spot in NASL, with eight matches to play.