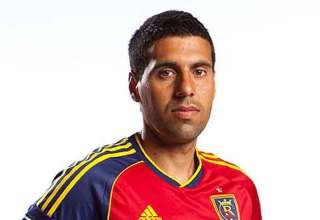 One halftime change altered the course of the game. It sent Real Salt Lake off the rails, and gave the Vancouver Whitecaps a major advantage.

Javier Morales, the playmaker in Real Salt Lake’s midfield set-up, was forced to come out at halftime. The Whitecaps, who were losing the midfield battle through the first 45 minutes, took advantage of Morales’s absence, scoring twice in the second half and seal a 2-1 win Saturday over their Western Conference rivals.

For RSL, the loss continues a string of misery for the club in Vancouver. RSL lost 3-0 at BC Place late last season, after a July match at Empire was postponed because the grass surface — installed for a friendly against Manchester City — was unplayable because of days of torrential rain in Vancouver.

So, after Saturday’s loss, you might not blame RSL for not thinking of Vancouver as a nice place to visit, no matter how many Japadogs you’d offer them.

In the first half, with Morales pulling the strings, RSL had the edge in possession 54-46, and created the best scoring chance of the half — which came off a cross from the Argentine midfielder. But, when Morales came off after 45 minutes for youngster Luis Gil, the game changed. Vancouver went from being second-best in the midfield to dominating the middle of the park. And the Whitecaps were rewarded with two goals in quick succession

Camilo’s opening goal came thanks to a bit of luck. Whitecap Darren Mattocks had a chance in front of the RSL goal, but it was blocked by Canadian Will Johnson, who had tracked back from his midfield slot to help the back four. But his clearance bounced off a fellow RSL defender and came to Camilo, who made no mistake, placing the ball in the corner of the goal.

Dane Richards added to lead, placing a perfect shot inside the post from just outside the top of the RSL penalty area.

In fact, the Whitecaps were comfortable enough that coach Martin Rennie was able to give Designated Player Kenny Miller his first taste of MLS action, and then brought on Canadian Russell Teibert for a run-out before he leaves the club to join the national side for its Aug. 15 friendly against Trinidad and Tobago.

RSL got a late consolation, as Nat Borchers, pinching up from his central defensive position, climbed well to head home a goal deep into stoppage time.

Even though Real Salt Lake dominated the midfield in the first half, the Whitecaps did manufacture two decent chances, a 25-yard blast from Camilo that forced RSL keeper Nick Rimando into a leaping save, and a header from Camilo that also tested Rimando.

But RSL carved out the best chance of the first half. A deft cross from Morales was flicked off the post by Alvaro Saborio, who beat keeper Brad Knighton and Vancouver defender Jay DeMerit to the cross.

Not only did Saborio get to the ball first, but DeMerit and Knighton — who got the start with regular No. 1 keeper Joe Cannon serving a red-card suspension — collided into each other. DeMerit, woozy after the incident, tried to play on, but needed to come off a few minutes later, which allowed defender Andy O’Brien to make his MLS debut.

You had to wonder if Borchers would have got that late headed goal for RSL had DeMerit still been in the match for the Caps.

But, of course, the bigger question is if the game would have turned as it did had Morales stayed in the match.