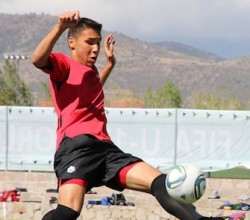 Teenagers Sadi Jalali and Kianz Froese Gonzalez have committed to leave Canada and play club football in Germany — but they have made FC Edmonton their Plan B.

Both have agreements in place to go to Germany, but are waiting on their visas/work permits. If either or both can’t make the move due to immigration issues, they have committed to FC Edmonton as their back-up plans. So, if either or both deals hit snags, the player in question would remain with FC Edmonton.

Jalali has an agreement in place with Kaiserslautern, while Froese Gonzalez is set to go to Mainz 05.

Both were training with FCE Wednesday at Victoria Soccer Club on the city’s north side. FCE opened its camp on Monday, as it is already preparing for the 2012 NASL season. The two teens will stay with FCE until their German paperwork clears.

Left-footed defender Justin Farenik, a Calgarian and former Trinity Western Spartan, is also on trial with the team, as the team addresses the need for left-footed defenders after cutting both Eddy Sidra and Alex Surprenant, who platooned at the left-back position in 2011. Farenik would likely be a depth player if he’s kept.