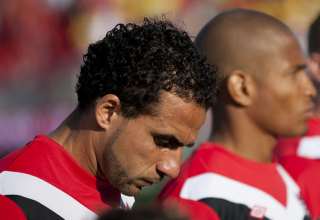 >It is official. Dwayne De Rosario is off to the New York Red Bulls.

Both the Red Bulls and Toronto FC confirmed the trade Friday afternoon, hours after it reportedly had hit a snag.

According to various sources, De Rosario and the Red Bulls will talk about an improved contract from his current deal, which pays him more than US$400,000 per season. If the Red Bulls were to make De Rosario a Designated Player, the club would save cap space, as the hit for the DP is more than US$100,000 less than he is making at the moment.

TFC gets a first-round pick, Danleigh Borman and Tony Tchani from New York.

Reports of the deal appeared across Canadian media outlets Friday morning — catching the Red Bulls and MLS by surprise, as both had thought the trade would not be made public until De Rosario had the chance to meet with NYRB officials. The 11 understands that New York had no plans to announce the trade today.

“I am sorry to the wonderful and passionate fans at TFC about my departure to NY Red Bulls,” wrote De Rosario on his Facebook page. “Just wanted to say it has truly been an honour coming back home and playing for my home crowd. Unfortunately things didn’t work out, as it was my goal to help TFC succeed in winning an MLS Championship. You the fans will always hold a special place in my heart at TFC. Best wishes.”

Tchani is a 2010 first-round draft pick and is a Generation Adidas prospect, so he has no cap hit. Borman made US$40,000 last year.

“We have acquired two very strong players that I believe will have an immediate and long-term impact at our club. I’d like to thank Dwayne for all his contributions to Toronto FC and wish him well with his new club in New York,” said Toronto FC Head Coach and Technical Director Aron Winter in a release issued by the club. “It is unfortunate to have to trade our captain, but this deal is part of our rebuild process and helps to open cap room for our club.”