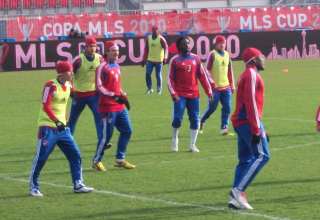 When it comes to national allegiances, Ugo Ihemelu is playing it cool.

The FC Dallas defender has been to the U.S. national-team camp, played in a couple of friendlies, but he’s still hasn’t been capped in an official game that would tie his eligibility to the Americans.

Ihemelu, born in Nigeria, spent his childhood in Winnipeg. And, in the past, he expressed interest in representing Canada, but there were questions about his Canadian passport, so he never made it to the field for our national team

Give Ihemelu credit; he’s not taking a page from striker Teal Bunbury, who just made his first appearance last week for the U.S. national team, after telling various media outlets, including this very writer, that his future was with the Canadian team. Ihemelu realizes it’s best to be non-committal.

But, if temperatutes dip to 1 C for Sunday’s final, Ihemelu doesn’t think his formative years in Winnipeg will do him much good.

“I still remember it, being cold and windy. But I’ve been in Texas for a while. After a while, your body sort of forgets the cold.”

Ihemelu and central defence partner George John will face their toughest challenge of the post season, trying to bottle up Colorado’s lethal strike partnership of Conor Casey and Omar Cummings. Ihemelu knows that Cummings will try to open up gaps with his speed, and Casey will go to the space, waiting for crosses to power home.

“George and I have to be on the same page,” he said.

“This morning, my throat is itching a little bit,” he said through a translator. “But I am ready for anything. It’s a very big game which means a lot to me… I am going to play my best.”