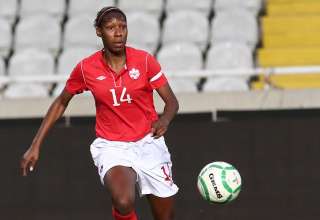 Canadian national women’s team coach John Herdman is trying to introduce a new formation and is attempting to change the DNA of our soccer program from one of counterattack to useful, dangerous possession.

On Wednesday, he named his roster for two upcoming friendlies — April 4 in France and an April 7 rematch of the Cyprus Cup final, which will see Canadians travel to Rotherham to face an English side that beat Big Red 1-0. Each game will give Herdman the chance to assess the work in progress.

The roster Herdman named for the two friendlies features more veterans than each of the previous two tournaments — the Yongchuan Cup and the Cyprus Cup — in which the Canadian women have participated. But defenders Ashley Lawrence, who played for Canada’s U17 and U20 teams in 2012, is on the roster. And Kadeisha Buchanan, who played in this year’s Cyprus Cup at the age of 17, keeps her place.

“Kadeisha Buchanan has grabbed a hold of a shirt and she hasn’t given it back,” said Herdman.

But, despite what he’s seen from Buchanan and Lawrence, Herdman is concerned that there simply aren’t enough Canadian youngsters who will be technically able to keep up with the improving standards of play in the international game.

Herdman said he could squeeze more out of the team that won bronze at the 2012 Olympics, that he could stick with that core of players and get Canada to the 2015 Women’s World Cup. But if he did that, there would be “no legacy” for Canada after the WWC. So, he wants to get the U20s and U17s into the system, so they can learn. And that means Canada needs regular friendlies against “podium threats.”

“We look to play them as often as we can throughout the year,” said Herdman.

“We need to have a (young) group underpinning this aging team.”

Last week, when Canadian Soccer Association officials were in Edmonton last week to announce the city as the host of the WWC opening game, General Secretary Peter Montopoli confirmed plans are in the works for high-profile friendlies for the Canadian women in the host cities ahead of the big tournament.

But don’t think that Herdman’s youth movement is having an immediate positive impact. Of the youngsters, he said he could only see three or four players who would be able to keep up with the technical advancements made by the likes of the French and the Japanese.

“We haven’t found that wide player yet who really excites us.”

And he needs to identify that wide player. Herdman has been working on making Canada more of a possession-based team. But there’s a caveat. Talk to Herdman and you’ll realize he doesn’t care so much about padded possession stats: passes from fullback to centre back to keeper back to centre back. What he wants is useful, dangerous possession. “Getting into their half and staying in their half for long periods of time.”

He said the stats from the Cyprus Cup were encouraging, but his goal would to see Canada regularly have a 60-40 advantage in territorial play. This is something you are going to hear a lot more coaches talking about — possession stats are widely over-quoted and overrated because they are often influenced by long periods of unthreatened passes in a team’s own end. With coaches shifting mindset to territorial advantage over possession, we are going to talk more about pressure with the ball rather than simply having the ball.

The majority of the Canadian team is made up of NWSL players. Even though these friendlies bring players into conflict with the North American pro season, Herdman said the teams have been “brilliant” with which to work. Of course, it helps when the Canadian Soccer Association is paying the salaries of 16 Canadian players in NWSL.

But, despite the emphasis on the NWSL players, Herdman said advances in technology have made it easier than ever for coaches to access footage and stats of players still working overseas.