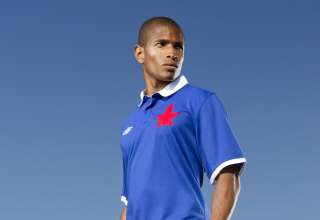 With the media room all neatly decorated at BMO Field the obvious focuses of Canadian Soccer Association’s Thursday press conference were its centennial celebrations and the unveiling of its limited-edition heritage kit.

But it didn’t take long for the media to dress down the event and ask the important questions about the men’s national team and its preparation for the World Cup qualifying campaign, which resumes in June.

The first challenge for national team coach Stephen Hart will be to select a provisional roster for a training camp to be held in Florida beginning on May 21. He has been impressed with a number of players, most notably Bundesliga 2. Star Olivier Occean, but he first has to rule out who is unavailable – either by choice or injury.

The two big names that Hart was immediately questioned about and who have yet commit to Canada’s national team were Jonathan de Guzman and Junior Hoilett.

“In all honesty, you guys talk to them,” said an obviously frustrated Hart. “I don’t think it’s going to be a reality, not in the near future. But other than that you will have to speak with them directly nothing has changed.”

Hart elaborated on his frustration, saying it has come from the fact that he’s been answering the questions while both de Guzman and Hoilett have been silent.

“Well of course because they can bring something to the team and maybe that’s what’s disappointing,” added Hart. “But for me I have a whole bigger group that wants to play for Canada and are eager, ready to go into camp and that for me is more pleasing.”

Bringing the Heat
For Hart to get his roster ready for its opening World Cup qualifying match in Cuba is to first recreate the conditions his team will be playing in. Instead of playing in the evening which is often the norm, this match will be played at the hottest part of the day.

“Florida is important because of the heat and the environment — the Cuba game is at 2 o’clock so we’ll try to mimic that as much as possible,” said Hart.

The first group to arrive at the camp will be players from Europe while their MLS counterparts will be released following their matches on the 26th.

“The date has been pushed to the 21st just because of club situations,” said Hart.

“The group will be smaller at first. The European group is going to come in and we’re going to sharpen them up a bit physically because some have had a break and some have had no break at all, so mentally we have to measure it well.”

Once Hart is able to acclimate his players to the heat, the national team will travel to Toronto to prepare for its centennial friendly match against the U.S. at BMO Field on June 3. He may use that match to look at players who may not get the call for the first group of qualifiers. He admitted that even though the game was important from a celebration standpoint, he needs his players rested and prepared for Cuba.

“It’s a situation where we have a celebration of our 100 years and we have a game against a traditional opponent, at least recorded anyway,” said Hart. “But of course the game also serves as a preparation of the upcoming qualification campaign where we kick off against Cuba and we’re trying to get into the Hex.

“So it’s sort of a big year because there’s so much going on, but the reality is the World Cup campaign.”

There have been rumours that Hart and the CSA were working on a closed-door friendly to take place ahead of the qualifiers as well. He confirmed the rumour but said nothing was final as of yet.

“Actually my phone has been ringing in my pocket at the moment, I’m hoping that’s the sort of confirmation on the game,” laughed Hart.” “We’ve been having some discussions, there are some little problems – we have two potential opponents that we would like to play but we haven’t got firm confirmation. One of the problems is the issue with one of the teams, if they can play us they will sort of thing.”

CSA’s General Secretary was also answering questions at the press conference and outlined the plans for the centennial celebrations. The 10-day series of events will kick off May 24 in partnership with the Canadian Soccer Hall of Fame and will also be celebrated with events held in each and every province.

There will also be announcements of the “Team of the Half-Century,” “Top Ten Moments of Canadian Soccer History” and the best starting XI (men and women) through fan balloting.

But the centrepieces will be the women’s centennial match on June 30 against China in Moncton, the first-ever national-team match in New Brunswick, before its participation in the London Olympics and the much anticipated men’s match against the U.S. on June 3.