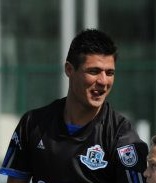 There was one silver lining for FC Edmonton fans out of Wednesday 2-0 loss to Vancouver in the opening leg of their Amway Canadian Championship semifinal.

During the halftime show of the TEAM 1260 broadcast of the ACC match, FC Edmonton spokesman Andreas Morse confirmed that Chilean striker Yashir Pinto is cleared to cross the American border to play football.

That means that Pinto is eligible to play in all remaining NASL matches this season.

Pinto missed Tuesday’s FC Edmonton practice, as he was at the Chilean consulate in Calgary ironing out the last few details.

In the off-season, Pinto, a former Chilean U-20 player, came to FC Edmonton on loan from Santiago powerhouse Colo-Colo. But, after some abnormal results on his first medical, he went back to Chile, and his move to Edmonton was delayed for several weeks.

Once the move was cleared, the United States did not automatically rubber-stamp his application to work there. So, he missed the first three road games of the season, as he could not cross into American territory to work.

He set up two goals in his FCE debut, the home-opener 4-3 loss to Minnesota at Clarke Stadium.