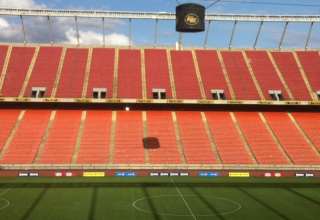 The number was painful to read, painful to report. In a concrete monolith of a stadium that’s built to seat more than 60,000, just 2,777 people came to see FC Edmonton play the Vancouver Whitecaps in the first leg of their Amway Canadian Championship semifinal. And that number was bolstered by a healthy number of Vancouver supporters who made the trip to back the Whitecaps.

In fact, from the broadcast booth on the other side of the stadium, the noise made by Curva Collective and the Southsiders drowned out anything the rest of the small FCE-suporting portion of the crowd could muster.

It was supposed to be a great scenario for the tournament in Edmonton. Unlike last year, when Edmonton faced Toronto, the Eddies would play a regional rival, with a chance to build something of a Western Canadian derby. The start time was at a more fan-friendly 8 p.m., when last year it was tacked onto the end of the work day to accommodate Eastern time zone TV watchers. Yet the Whitecaps game drew far less than the 2011 edition against Toronto.

Is it because casual sports fans in Edmonton got wrapped up in the fantastic TV drama that was the Caps-Rangers NHL playoff game that went into triple overtime (“Sure, man, we’ll leave for the stadium as soon as I see who wins this game! What? The soccer game’s over?”) or that Edmonton’s local-sports attention is focused on the junior-hockey power Oil Kings?

Maybe that’s part of it. But this is the telling number: 3-13-5. What is that? FC Edmonton’s record since July 4, 2011, including NASL regular season, the 5-0 playoff beatdown that was handed to it by the Fort Lauderdale strikers, an 0-3-1 start to the 2012 season and that loss Wednesday to the Whitecaps.

When you are a second-division soccer team in a hockey-mad town and have won just three games since last July, you aren’t going to be a marquee attraction.

In the Canadian soccer community, FC Edmonton is seen as a feel-good story, as 17 of its roster spots are occupied by domestic players. And the legend grew last season as FCE roared out of the gate, challenging Carolina for first place in NASL for the first three months of the season. And that early surge helped create some buzz and interest for that Toronto Voyageurs’ Cup series last season. That early surge was enough to send the team to the NASL playoffs, and most of the Canadian soccer community actually didn’t notice the paradox — great in the first half of the season, not much better than league also-ran Atlanta late in the year.

But, the truth is that since July 4, the team hasn’t been able to recover from the slide. Massive changes were made in the off-season. High-profile (for NASL standards, anyway) players like French midfielder Serisay Barthelemy and Chilean striker Yashir Pinto were brought into the fold. Over and over, you hear FCE brass tell you that this team is much improved from 2011. The team is moving into a more fan-friendly stadium, which has a better atmosphere than Foote Field. Clarke Stadium should have all of the 4,000 new seats in by the end of May. The team’s games can now be found on CBC.ca, a major media step up from simply seeing games on UStream. The team has a three-year apparel deal with Adidas, the kind of pact seven other NASL teams would do anything to have.

But, with all the new attractions, all the bells and whistles, the key to a team’s success at the gate is winning. Somehow, this team has to rekindle the magic it had before July of last year, when Shaun Saiko pulled the strings from midfield and Kyle Porter was bashing in goals at a great clip.

And, if Edmonton’s poor form continues, the inevitable self-defeating cries of “see, you can’t win with Canadians” will be heard, even though a Canadian player (Matt Lam) was FCE’s best man on the pitch against Vancouver, even though Saiko was the lone member of FCE to be selected to the NASL Best XI last year. Even when the Canadians aren’t the problems, they tend to be scapegoated in our soccer culture.

Because of that dream start in 2011, FCE has gone through its first one year and a bit of playing games that matter with little or no criticism. Surely, the lives of coach Harry Sinkgraven and Director of Soccer Joe Petrone aren’t disturbed by media people calling for their heads or pundits trying to tell them that Edmonton should play the game differently.

But, while many statistics in soccer only serve as window dressing, the win-loss column doesn’t lie. With the feel-good factor stripped, FCE’s rebuilt back line has to be in the spotlight. So far, the group hasn’t proved it can handle large, physical strikers, whether it’s Whitecap Eric Hassli or Minnesota’s Amani Walker. Set pieces are killing FCE at the moment, and every corner, free kick or throw-in in Edmonton territory causes Eddies’ fans to have sweaty palms. Can it go on like this, or will there be a reckoning where the club realizes it needs to bring in a big man to help out on the back line?

Last year, John Jonke finished the season strongly, even earning a Defensive Player of the Week award in September. But the no-nonsense central defender was one of 11 players cut soon after the playoff loss. But Edmonton hasn’t brought in a physical defender to replace Jonke. The defence is more mobile, moves the ball better, but is smaller.

In Wednesday’s post-match press conference, Sinkgraven said two central defenders can handle a bigger striker if they are well-positioned, one challenging for the ball and the other backing off to cover space. But he didn’t feel his defenders were challenging the Whitecaps’ big men at all. So, maybe positioning is the answer. But, it’s hard to watch Edmonton line up to defend free kicks and see the opposing players towering over them. And on corner kicks, where that first head to the ball is vital, the height disadvantage has been telling.

So, yes, on faith, we can say that the Eddies are a work in progress. We can say things will get better, starting with Sunday’s home date to the winless Carolina RailHawks. But, as losses pile up, so will apathy. After all, it’s the City of Champions, right?