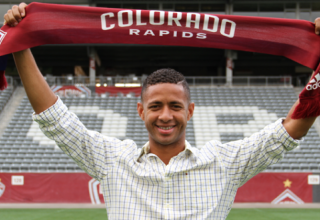 The man who ended the Vancouver Whitecaps’ playoff hopes is the MLS Player of the Week.

Gabriel Torres, whose rocket of a shot was the margin of difference in Colorado’s 3-2 win over Vancouver on Saturday, got the most first-place votes from the members of the North American Soccer Reporters.

Torres scored right after Camilo had equalized for Vancouver on a penalty kick.

The win mathematically eliminated the Whitecaps from playoff contention.

Torres scored twice; the first, which drew the game level at 1-1, came on a penalty kick after Whitecaps’ defender Carlyle Mitchell was called for bringing down Drew Moor in the box. Mitchell had his arm around Moor as the ball came into the area. It was the correct call, a letter-of-the-law call, but one that’s rarely made.

But Torres’s second goal of the night was the one that did in the Whitecaps. He shuffled in from the left side of the area, set the ball and then unleashed a shot into the top corner of the Whitecaps’ goal.

How The 11 voted: Torres. In Colorado, visiting teams often drop off and give the Rapids space in the final stages of the game, as they deal with the fatigue that comes with playing at altitude. Torres was given time and space, and he took advantage of it. His goal had the biggest sense of occasion of any strike in MLS this past weekend.