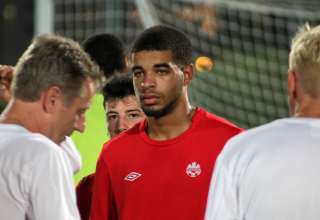 Note to the Canadian team. Don’t wash the soccer gear. Before the final group stage game against Argentina, do everything that you did before Tuesday’s U-17 World Cup match against Iran.

You don’t want to do anything to disturb that luck.

Sometimes, draws feel like losses. And, sometimes, they feel like wins. Tuesday’s 1-1 draw with Iran definitely falls into the latter category.

Iran should have won this match. Instead, with Argentina and Austria still to play on Tuesday, every match so far in Group E has been a draw. And that means that Canada knows it goes into its final group-stage match with the Argentines with a real chance of making it to the knockout stages.

With the score tied 1-1, Iran wasted two golden opportunities to score the match winner. In the 70th minute, Amir Mazloum nutmegged Canadian right back Eric Davies, then swerved around keeper Marco Carducci. Instead of hitting the open net, he put his effort off the near post, and the rebound chance was skied over the bar.

And, with about five minutes left to play, Carducci made a game-saving stop on Yousef Seyyedi. The Iranian sub got the ball in the box after it caromed to him off an initial pass attempt from Saeid Ezatolahi. But Carducci got off the line, made himself big, and the shot went off his leg.

In the heat of United Arab Emirates, conditions which were much more favourable to a Middle Eastern team than one from North America, Iran turned the screws in the final 20 minutes but couldn’t find the winner.

So, Jordan Hamilton’s goal would stand as the equalizer. Just three minutes into the second half, he finished a chance off the post, after Hanson Boakai’s cross was flicked on by defender Elias Roubos.

The Iranians came out of the gate strong, often sending as many as five attacking players forward to press the Canadian defence. Understanding that the best way to make the heat their ally would be to try and wear down the Canadians early, the Iranians pressed with large numbers. Of course, the trade off was that the Iranian back four had little or no support, with no real sign of a midfielder who would help.

What it led to was a very open first half.

And the Canadian got the first chance, with Iranian centre back Mostafa Hashemi stepping in to block a Boakai effort after a nice run and through ball from Kianz Gonzales-Froese.

And, with a laser-beam of a shot from 25 yards out, Amirhossein Karimi gave the Iranians the lead. Canadian defender Alex Comsia decided to back off rather than challenge the shooter, and Karimi took advantage of the time and space by delivering a rocket that Carducci knew little about.

But, the game continued on its fast pace, and Canada came close to an 11th-minute goal, when Boakai played through Hamilton, but the effort went wide of goal.

Even though Marco Bustos was influential in Canada’s 2-2 draw, setting up a goal and hitting the woodwork, Canadian coach Sean Fleming left him out of the starting lineup. Bustos finally came on after the one-hour mark. And Fleming decided to take Marco Dominguez out in the 34th for Jordan Haynes, giving the midfield a little more strength to deal with the high-pressure tactics of the Iranians.

Those high-pressure tactics did what they were supposed to do; the Iranians wore down the Canadians to the point where, late in the game, the match was one-way traffic. But, this time, Canada survived it for a point.