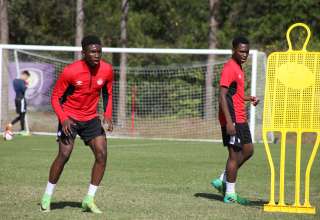 Following Canadian soccer can be sorta ridiculous at times.

On Wednesday, Canada Soccer released its roster for the  squad that will make an attempt to qualify for the upcoming U-20 World Cup. The roster included Clement Bayiha, Adonijah Reid and Daniel Kinumbe. Both Kinumbe and Bayiha are listed as Ottawa Fury members (check the roster list below). Reid was on loan from FC Dallas to the Fury.

That release was received at 10:42 a.m. (Eastern Time) on Wednesday. At 11:18 a.m., the Fury sent out a release celebrating the fact that “Reid, Kinumbe and Bayiha selected to Canada U-20 squad.” As stated in the release. “Forward Adonijah Reid and defenders Daniel Kinumbe and Clement Bayiha will get to don the maple leaf looking to qualify Canada for the FIFA U-20 World Cup Poland 2019.”

But, and this is a pretty big “but,” the Fury announced Tuesday — the day before the U-20 announcement — that Reid, Kinumbe and Bayiha were part of a 15-player purge, as Ottawa’s management cleaned house after a disappointing USL season that saw the team finished the playoffs. The three call-ups were all confirmed not to be returning to the Fury for the 2019 season.

The Fury’s decision to cut ties with more than half of the players on its roster is already creating a bit of CanSoc social-media storm (or, as big a social-media storm as CanSoc can create, really), as the common wisdom was that one of the team’s reasons for deciding to remain in USL for 2019, and not join the new Canadian Premier League, was so that its roster would be protected from what might be a lower salary-cap situation.

It should be noted that oftentimes, the releases of U-20 rosters are coordinated days in advance of them being made public, between the staffs of the clubs and Canada Soccer. So, when this was all planned, all three of the players would have still been part of the Fury family.