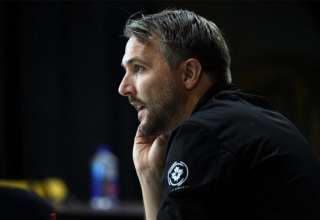 Given the state of Canadian soccer, the seven men sitting around this table in could be forgiven for having doubts. They are at the fourth in a series of the seven Canadian Premier League open trials and, with the participation of Pacific FC coach Michael Silberbauer, it is the first instalment of the trials all seven head coaches have been able to attend. (Up to now, Pacific’s interests have been represented by assistant coach James Merriman. FC Edmonton’s brass had to skip a session in Montreal because of the preparations needed for its Al Classico friendly against Cavalry FC).

For someone coming from outside the Canadian system, in this case Denmark, Silberbauer provides an analogy for the situation facing the Canadian player:

“For me as an outsider, the Canadian’s pathway has been a staircase going up and all of a sudden you had to make three steps at once. And the CPL is now those missing steps in the staircase for players, coaches, the organization, everything.”

The Canadian soccer player development system has been regularly described as “broken” or “fractured,” a criticism these rookie professional coaches know all too well, as most of them were part of that system.

Cavalry’s Tommy Wheeldon laments the lack of a pro player pathway while Wanderers’ Stephen Hart calls it a “Mayan pyramid,” the implication being its flat top has no elite opportunities for players. York 9’s Jim Brennan discusses the fact that many kids are priced out of clubs and academies. Forge FC’s Bobby Smyrniotis picks up on that point and decries the lack of financial support in the system, mostly absent in Canada but replete in other countries. They all reference the fracturing that happens between provinces, districts, clubs and academies. Yet another theme is the unhealthy competition between people in all parts of this fractured player pathway and the isolation that the competition and fracturing creates.

But these problems are not new. What is new are the actions currently being taken as part of building the Canadian Premier League from scratch.

Brennan puts it very simply “We are creating a movement. For this game.”

It is a sentiment that is echoed around the table. The task is daunting. The CanPL coaches are building a soccer league in a country that has never really embraced one. Success on the field, in the stands, and with player development may be elusive for years. And, on top of that, the expectation may be that the league will be a panacea for the ills that plague Canadian soccer, an expectation that is almost guaranteed to be unfulfilled. Regardless, these individuals have embraced the challenge, and are taking action.

According to FC Edmonton’s Jeff Paulus, the league is designed to address the broken system and offer the opportunities to players that previously were unavailable.

The trials are paying dividends. According to Wheeldon “…the level of talent hasn’t surprised me because the talent has always been there.”

The top players from the trials are put on a coaches’ “watch lists” and, from there, invitations to team tryouts may follow.

Valour’s Rob Gale says in Hamilton they found a talented player who none of the coaches were aware of but who had the ability to potentially make it in the pro game. Throughout the trials, they have been identifying players who otherwise would have never got chances. Admittedly, the chances being provided are slim, but they are chances nonetheless. The trials comprise one action in a series of actions that will end, and begin again, once the CanPL team rosters are built and once the league kicks off next April.

Perhaps inadvertently, Silberbauer provided a fitting analogy for the task ahead for these seven coaches. Addressing the issues in Canadian soccer player development will take a number of steps. On this front, the Canadian Premier League is taking one giant step up.