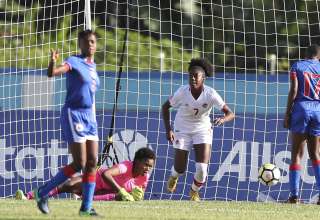 If there was one criticism of Canada’s first two games at the CONCACAF U20 Championships in Trinidad and Tobago, it’s that the Canadians didn’t start well in either game.

The Canadians beat Costa Rica and Trinidad and Tobago comprehensively; but, in both matches, they conceded the opening goals.

So, if there was one thing Canada would have wanted out of its final group-stage match, it was a better start. And they got it. Shana Flynn got a hat trick in the the first 18 minutes of the match, as the Canadians went on to trounce Haiti by a 4-0 score. With the win, Canada secures top spot in its group.

Flynn needed a couple of whacks to get the ball across the line after a pass from Jordyn Huitema in the sixth minute. She found the net with a well placed shot inside the far post for her second. On the third, she slotted the ball low after beating a Haitian defender to a through ball.

After that, the Canadians (and Haitians, too) went into cruise-control mode.

Of the four semifinalists in the Championships, three will qualify for the U-20 Women’s World Cup in France; the two finalists and the third-place team. If Canada wins its semifinal match, the reservations will be made for the World Cup.

Tanya Boychuk got the fourth goal late in the game, after Haitian keeper Naphtaline Clermeus fumbled a cross, allowing the Canadian to get her head to the ball.

Clermeus is Haiti’s back-up. Haiti, like Canada, had already booked its spot in the semifinals. Instead of risking the starters, Haitian coach Marc Collat made nine changes to his lineup, including his keeper.