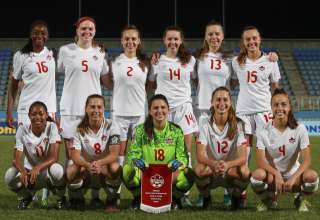 The hottest new club in the Caribbean is the Ato Boldon Stadium. Located in hot, humid Trinidad and Tobago, this place has everything. Bad calls, dubious goalkeeping and a Canadian team that’s advancing to the semifinal round of the U-20 CONCACAF Women’s Championship!

Despite going down 1-0 early to the home team, a bizarre hat trick from Jordyn Huitema and a penalty kick goal from Gabrielle Carle gave Canada a 4-1 comeback win over the home side. The win lifted Canada’s record to 2-0-0 in group-stage play.

Canada is off to the semis with one game to spare in the group stage. Three of the four teams that make the semis will go on to the U-20 Women’s World Cup.

But, wow, what a bizarre game. Wait, this is CONCACAF, a world where nothing is bizarre, a Twilight Zone of soccer unpredictability. So, maybe a “bizarre” game in CONCACAF would be a match played on a perfectly manicured pitch, where the ref got everything spot-on and players got up as soon as they could manage.

T&T grabbed the lead just a couple of minutes in on a corner-kick set play; the ball was hit low to the top of the box, where Aaliyah Price was left unmarked and placed the ball perfectly into the top corner of the Canadian net.

But, then it was Huitema time. Or, more accurately, T&T keeper Klil Keshwar’s chance to grab the spotlight for the wrong reason. First, she made a hash of a floating Canadian corner kick. A ball that looked to be a fairly easy claim for the keeper went right through her, and basically bounced off Huitema and into the net.

Keshwar wasn’t done; Canada took the lead in the second half when a shot from Huitema, which came off a scrambled corner, went right through her hands. Sure, Huitema did a great job wrapping her foot around the ball, but the keeper has to make that save.

In the tournament opener, Canada had what looked to be a perfectly good goal disallowed because the linesman’s flag went off for offside on a play that couldn’t have possibly been offside. But CONCACAF karma — if there is such a thing — led to a bizarre third goal.

A Canadian shot was saved by Keshwar, looking to atone for her earlier errors. The rebound rocketed off of her and, from close range, caromed into the arm of T&T captain Natisha John. Now, the defender couldn’t have known anything about that shot being deflected at such close range, and her arm wasn’t in an unnatural position. But Honduran referee Melissa Borjas Pastrana pointed to the spot and produced a red card for John.

Even if you could make the argument for the hand ball, to suggest John was deliberately stopping a goal scoring chance — when the keeper has made the save and the ball has ricocheted away from the net — well it was ridiculous.

Sure, we love to be high and mighty when CONCACAF taketh away from Canada, but we also need to be fully aware that even the host team of a tournament can fall victim to officiating standards that continue to be infuriatingly subpar in this region.

The comedy of errors came to a close when Huitema got her hat trick. She stormed onto a long ball played up the middle of the park by Julia Grosso and stuck it in the back of the net.

That doesn’t tell the whole story, though. Truth is, the keeper could have read the play as it happened, come off her line and dealt with Grosso’s ball. But she waited way too long. There were the two T&T defenders that were ball side and goal side of Huitema, but allowed the Canadian to storm past.

Canada is 2-0-0, but the truth is, based on the standard of play we’ve seen so far from the two opponents so far, it’s absolutely impossible to get a real read of where this Canadian team is in terms of their progress. We may have to wait till the semis to find out — when it’s do-or-die.