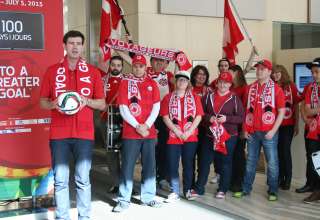 It is not a healthy discussion, but it could become a factor in Canada Soccer’s push to be a co-host for the 2026 World Cup.

Calgary vs. the Rest of Canada. Olympics vs. World Cup. Skiing, curling, skating and hockey vs. soccer.

On Tuesday, Edmonton’s city council was presented a report that outlined the pros and cons of being a potential World Cup host. City council gave the proposal the green light, committing to sign all the necessary documents to keep it in the running to host World Cup games in 2026.

Edmonton is one of four Canadian cities left that are being considered as hosts for World Cup matches in 2026, if the joint bid between the United States, Canada and Mexico is successful. If the joint bid from CONCACAF beats Morocco in the FIFA vote, Canada will get 10 games, likely split between two to three of the four finalist cities.

It’s estimated that Edmonton would need to spend between $35 and $55 million to upgrade facilities, including laying down natural grass surfaces at Commonwealth Stadium and the approved training grounds.

Toronto Mayor John Tory has openly stated that he backs spending $30 – $45 million to prepare Canada’s largest city to be a World Cup host; some of that money would go to expand BMO Field’s capacity. Montreal and Vancouver round out the field of Canadian potential host cities.

“Being part of one of the world’s biggest sporting events is a once in a lifetime opportunity for Edmonton and we now need the provincial and federal governments to commit to the bid,” said Mayor Don Iveson in a release issued by the city. “A bid that unites three countries has never been tried at this level of international sport and it’s exciting for Edmonton to be part of that effort.”

Ah, so this is going to be the rub going forward: Commitments from provincial and federal levels of government.

Edmonton’s administrators performed a risk assessment for the city’s World Cup-host bid, and the leading worry was…

The Calgary Olympic bid. The assessors suggested that it was “likely” that the joint bid to host the World Cup would clash with Calgary’s continuing pursuit of the 2026 Winter Olympics. The success of the Calgary Olympic bid was the only potential risk on the report deemed as a potential “worst-case” outcome.

The assessors reported that “Calgary’s potential bid to host the 2026 Winter Olympics may make it financially unviable for other orders of government to support to mega events in the same year.”

Basically, Edmonton is worried that, eventually, Canadian legislators and purseholders will have to choose if they want to pursue the united World Cup bid, or go for the Winter Olympics.

What could also complicate matters is that the IOC has stated that a Calgary Olympics could see some events held in Whistler, B.C. and Edmonton, in order to make it more cost effective.

Other risks identified by the assessors are the unknown security costs and requirements, that the limited number of games means limited revenue, poor exchange rate with the United States, and that no capital investment has been outlined in the preliminary joint World Cup bid.

But none of those were seen as big as a potential issue as a clash between World Cup and Olympic bids. 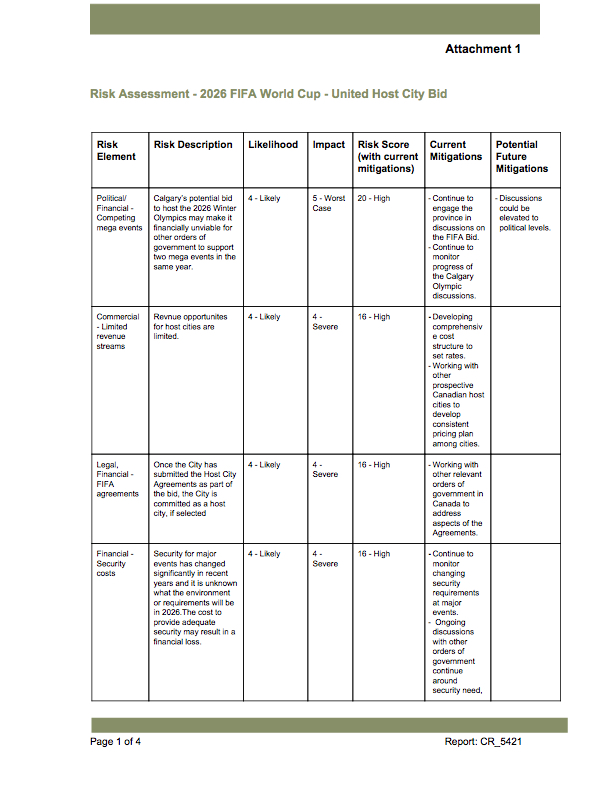