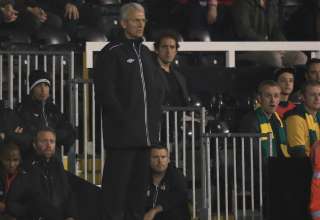 Benito Floro has been the Canadian men’s national team coach for almost a year. But, as he moves toward the first anniversary of his time in charge of the men’s program, he feels he has yet to actually manage the full first team.

Floro admits that it’s frustrating that Canada’s top talent pools are split into two significant camps. There are players in Europe, and those toiling in MLS. Different calendars. Different styles. And, most importantly, a massive geographic challenge.

So, if Canada holds a camp or has a friendly on North American soil, the side is MLS-heavy. If the game is on European soil, the roster is filled with players from clubs over there. And it means that there isn’t a chance for the coach to see what his real first-choice squad would look like on the field, because his first-choice squad would feature a healthy mix of MLS and Europe-baed players.

“Each time it’s 99 per cent [from either Europe or MLS]. So, it’s difficult to get to the level necessary to take a team into official games,” says Floro. “I have not been able to spend a lot of time with the players, there have not been a lot of camps. And when we are in Florida, it is not possible to bring in the players from Europe, and when we are in Europe, it is not possible to see the players from MLS.”

In May, a team made up mainly of European- based players gathered in Austria and played both Bulgaria and Moldova to 1-1 draws. More importantly, Atiba Hutchinson’s penalty-kick goal against Bulgaria ended a 14-month goalless drought for the national team.

While friendlies and camps are important, to allow Floro to try and teach the Canadian players a more fluid style, the coach makes it very clear that they aren’t, ahem, “real” games in his mind. And he says that it won’t really be possible to evaluate the team till the next Gold Cup, which also acts as a qualifier for the 2016 Copa America, which will feature both South American and CONCACAF national teams.

“To me, there are two phases. The first is the Gold Cup, it is very important to play official games, to be in a real competition — that’s the way to test the team.

“Then, to qualify for Copa America.”

“It is difficult, but we do have methods,” says Floro. “We want to be in contact every day with the players, to catalogue their games on video or the Internet. Then, to teach them how to play well, in their movement or how to tackle and defend, we do have different methods. The Internet and video are very important to us.”