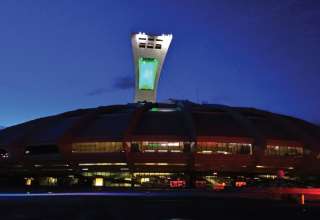 Cautious optimism. That’s the best way to describe Montreal’s reaction to Canada’s 2026 World Cup bid. No letters of support have been written. And, in a city and province that still feel the costs of hosting the 1976 Summer Olympics, big events like a World Cup can feel like déjà vu all over again…

Every four years, flags are affixed to all manner of vehicles — and Montrealers learn how many of their neighbours are soccer fans and from which parts of the globe their ancestors probably came. For some it is an eagerly anticipated quadrennial event while, for others, the world’s largest team-sport event barely registers on their radar.

The level of interest from the Quebec provincial government and the largest municipality in the province in a Canadian bid to host the 2026 event seems to be divided along pretty much the same lines.

Neither the City of Montreal nor the Quebec government has produced a letter of support for the Canadian Soccer Association bid, but Dimitrios “Jim” Beis, the city’s point man for procurement, sports and leisure and cultural communities, seems to be a lot more enthusiastic about the project than is the provincial authority, which is represented by the Ministry of Education, Leisure and Sport.

Beis was willing to speak on the topic, while provincial Minister of Ministry of Education, Leisure and Sport Yves Bolduc’s special assistant, Francois Whittom, proffered a short written reply to my questions on the 2026 World Cup.

Translated from French, it read, “No request for support or funding has been presented to the Ministry with regard to the 2026 World Cup. If any such request were to be made, it would certainly be considered and analyzed in terms of the needs of the organization and based on the applicable norms and criteria. Among the criteria are: The scope of the event, the benefits to the development of sports culture in our population and the promotion of certain sporting disciplines with our youth, the support of the sporting body involved, presentation of an appropriate financing plan, etc.

“Requests are also analyzed in a context of limited resources being available to fund events of this nature,” it continues. “In fact, several events of interest are submitted to the Ministry annually, which means that choices have to be made.”

It concludes with the assurance that the matter had been submitted to the team at the Ministry of Education, Leisure and Sport that is normally tasked with the analysis of major sports events.

If the MELS was a little less than enthusiastic, Beis is flying his flags, if only metaphorically.

“I’m of Greek origin and I’m still celebrating the 2004 Euro,” he says with a laugh. “I am a soccer fan and I will definitely cheer for my country (in 2026), my country being Canada, of course. I will definitely cheer for Greece and would hope that if Canada is there, that Canada does well as well. I don’t have a major preference in terms of who does really well. I just want to see good soccer.

“I know Mayor [Denis] Coderre loves sports. He was [the federal] Secretary of State for Amateur Sport and he believes in it as I do. I’ve been 25 years in municipal sports and recreation and I think something of that grandeur in Montreal would be welcomed by the people and also demonstrate Canada’s will to become one of the major players in the world, in terms of providing facilities and a market for some of these major events that take place worldwide.

“I think of the exposure the city of Montreal and Canada would get out of hosting such a major event; you can’t even measure that because it would be just incredibly huge.”

Enthusiasm can only take you so far. Beis recognized that there’s more to hosting World Cups than simply wishing and wanting.

“I think we’re all anxious but we have to be very strategic in the way we go about this. We have to evaluate all the options before a decision is ever taken, but there is interest.”

If and when the city and the other stakeholders manage to unite behind the 2026 bid, things will ramp up, says Beis.

“I think that before we get that machine going there has to be a clear decision from the city to be involved in this project. Once that happens then I suspect the real work is going to start and we’ll start evaluating everything from the bottom up and then see if it is a viable option and a viable project that the City of Montreal wants to be involved with.

“The will is there to explore it and see if Montreal could be a part of it. Ideally, I’d love to see it happen here. It would be incredible, not only for the fans and the young people who are going to be initiated into the sport and will continue to take part in soccer or any other sport later on in their lives but also what it going to do to Montreal in terms of it’s international recognition. We’re all conscious of that.”

Major capital spending for one-off sporting events has been a sore point in Montreal since the 1976 Olympics, and is always a matter of some delicacy and frequently generates more than a little controversy.

“Of course we have to consider the monetary contribution that it’s going to probablyrequire but we’re really far from that decision,” says Beis. “Now the only thing we know is that Mayor Coderre has expressed, as many have, interest in holding part of the World Cup here in Montreal. That’s where we are now and I think discussions will continue as we go forward and see what the next phase will be.”

With both Saputo Stadium and McGill’s Percival Molson Stadium hemmed in by geography and unable to be expanded to meet FIFA’s seating requirements, Montreal’s Olympic Stadium, which may well be between roofs and qualify as an outdoor venue by 2026, is the city’s only possible competition site although the Impact’s facilities could be pressed into service as practice and training facilities.

The only possible existing Quebec venue outside Montreal would be the Laval University stadium. Although it has held 18,000 for football in the past, its location is such that renovations would not mean having to overhaul major historic portions of Quebec City in an effort to expand the facility to 40,000 seats.

Coderre announced June 7 that Montreal will remain a stop on the Grand Prix calendar for the next 10, years the result of a $200-million agreement with Formula One Group. Federal coffers will provide $62 million while the Quebec government kicks in $50 million and the remainder comes from the City of Montreal and its tourism promotion board.