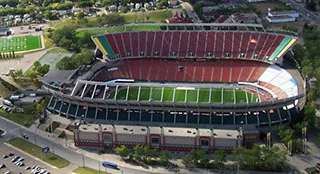 The Costa Rican Football Federation has already removed the story from its website, but FIFA has the match on its international calendar — Canada’s men’s team is scheduled host the Ticos for a May 28 friendly.

Over the weekend, the Costa Rican Federations issued a release on its website that its national side will be heading to Edmonton on May 28 to face Canada. By Monday, that story was removed from the site.

But, FIFA does have Canada slated to play Costa Rica on May 28 in Edmonton on its master schedule. (CLICK HERE). FIFA has been known to jump the gun on national associations when it comes to announcing matches, as it will often get the information from agencies putting the games together, and won’t wait for the national associations to sign off on deals.

If Costa Rica did indeed let the cat out of the bag by making the early announcement, that would mean the Canadian men’s team is indeed making a return to Commonwealth Stadium — a place which hosted the lion’s share of qualifiers throughout the 1990s. And for those wondering about Clarke Stadium, that field is not fit to host international matches because of the permanent football lines on it — it’s the reason why FC Edmonton plays its Canadian Championship matches at Commonwealth. Unless new turf is coming as part of Clarke’s upcoming renovation to a 4,000-seat facility, that’s a non-starter for a national-team match.

Edmonton’s city council has been pondering several renovation plans for Commonwealth ahead of the Women’s World Cup — but there has been a surprising amount of push-back from civic politicians when it comes to dumping money into the stadium. A friendly could be an important olive branch from the Canadian Soccer Association, showing that it hasn’t forgotten the city which used to be the home of the national side.

As well, the city is waiting to see how FC Edmonton’s attendance numbers will rise (or not) with Clarke being upped to a capacity of 4,000. The city has said it will look at the team’s plans for a new 8,000-12,000-seat stadium if, and only if, FCE can show it can fill the stands at Clarke this season. A national-team game in Edmonton would help create some buzz for the game.

And, if Colin Miller was once again needed to be Canada’s temporary coach for the match, the game would be taking place in the city where he works as FCE’s gaffer.