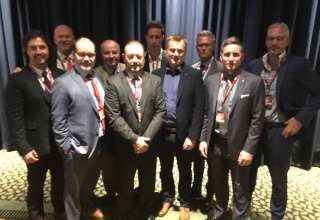 Those four join Winnipeg and Hamilton, which received their sanctions last year.

FC Edmonton, which has put its current professional operations on hiatus after withdrawing from NASL in 2017, is looking towards joining CanPL as well — if a stadium agreement with the City of Edmonton can be reached, and enough fan support is drummed up. As the board meeting was held, Calgary Foothills hosted FCE’s Academy in the second leg of the “Al Classico” rivalry. Last week’s first leg, with the incentive of free tickets, drew more than 3,000 in Edmonton.

On Friday, at the CanPL board of governors meeting in Edmonton, CanPL commissioner David Clanachan said that official announcements regarding “six to seven” teams would start being rolled out this week. The plan is to do one team announcement per week.

Clanachan said that the league was still on target to have 8-10 teams in its inaugural season. When asked about how many ownership groups were at Friday’s meeting in Edmonton, he smiled and said “more than eight.”

Canada Soccer President Steven Reed said the association was pleased that Canadian pro-team numbers have swelled to 11, with the six CanPL teams, plus FCE’s existing sanction, then the USL’s Ottawa Fury and three MLS teams.

“It has been another landmark year for Canadian soccer as we continue to grow the game from coast to coast to coast with our North Star Rising now more than ever. We would like to thank the membership for their commitment and passion to ensure that as a collective we are a Leading Soccer Nation,” Reed was quoted in a release.  “Today’s acceptance of four new professional clubs bringing the association to its highest ever total of 11 is a clear indication of the strength and potential for the game in our country”.