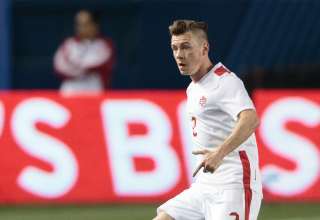 Even though Nik Ledgerwood has been in training camp on Alberta soil for the past three weeks, it still hasn’t really hit him that he’ll be playing home games this year, well, at home.

From 2003 to 2015, the Lethbridge, Alta.-born Ledgerwood plied his trade in Europe, spending most of those years in Germany. But, the Canadian national-team regular has been the most-hyped signing of FC Edmonton’s off-season. But, even though he’s probably seeing quite a few more pick-up trucks on the streets than he did in Europe, the fact that he’s actually at home, being paid to play the game he loves, is still a bit surreal.

“It really hasn’t sunk in yet. It’ll still take the first game, the first home game before it sinks in,” Ledgerwood said after the NASL team’s training session Tuesday at Commonwealth Fieldhouse. “Right now, it’s the preseason and we’re grinding away. It will be a little better with the camp coming up in Scotland, at least we’ll get some games. But, that’s not in Alberta, I’ll still be in Europe. I think it will be after that first home game that I’ll realize that I’m actually back home playing professional soccer.”

The Eddies will head to Saskatchewan later this week to get some action in on a full-sized field; the city of Edmonton has no covered full-sized fields. Then, it’s off to Scotland to finish the preseason schedule with a series of friendlies against Scottish Premier and First Division clubs, plus a match against Newcastle United’s youth side. Ledgerwood will need to leave the Scottish camp a little bit ahead of the rest of his teammates, as he needs to head to Vancouver and link up with the national side ahead of its massive March 25 World Cup qualifier against Mexico. Growing up in Alberta, Ledgerwood knew of many of the efforts to launch pro teams in Calgary and Edmonton that ended up in failure. In the early 2000s, when Ledgerwood was in his prime, the idea of playing on a stable Alberta-based pro team (key word: stable) was a pipe dream. But, FC Edmonton has changed the game, even though the team is still losing money in Clarke Field.

“There were a lot of failed teams that tried,” Ledgerwood said. “I mean, hats off that they tried. But, at least FC Edmonton is sticking around and it looks like they have the ambition to be around for a long time and they’re doing it the right way.”

“I think it’s huge for Alberta to have a professional team that’s been going for, what, six years now. It gives the young players something to look up to, to look forward to. They should be coming out to games and watching us train. If that’s what they want to look towards, it’s right in their doorstep now. That’s huge for Alberta and Canadian soccer.”

But, even though Ledgerwood was able to essentially land his dream job, the chance to play soccer close to home and family, it’s not an option that presents itself to many Canadians toiling in Europe.

“The surprising part is that for a Canadian to come back to Canada, it’s still extremely hard,” said Ledgerwood. “That’s pretty sad at the end of the day. Anybody trying to get into an MLS team in Canada or into an NASL team in Canada, it’s not just a showing-up-and-saying-you’re-here kind of thing. There’s a lot of work that goes into it. You still have to be on top of your game and be better than the players still here. At the end of the day, it’s not just about having that Canadian passport that allows you to play in Canada.

“I got lucky that things worked out really well with Edmonton and it was a team that I wanted to go to, to come home.”

Ledgerwood isn’t the first Canadian national-teamer to come to NASL; Julian de Guzman arrived in Ottawa last season and it hasn’t hurt his standing with national-team coach Benito Floro in the least. And, Ledgerwood is impressed with what he’s seen so far in Edmonton.

And, so far, he has liked what he has seen.

“I think it’s extremely high. I think training has been great, the first three weeks, we’ve done a lot of hard work — especially emphasizing on the fitness and the defensive aspect of our game and how we want to go about that. I think we’re definitely moving in the right direction and getting everybody’s on the same page. Everybody’s been great; the new guys coming in are pulling their weight and the experienced guys are doing the same.”

And he’s also been impressed by another Western city — Vancouver. Like many of his national-team mates, he was blown away by the partisan crowd that cheered Canada on to victory against Honduras in November. And, with ticket sales for Canada-Mexico already at over 35,000, with only a limited number going to Mexico fans, the roar should be even greater on March 25.

“That’s what’s going to drive more games to be played out west,” he said. “It’s got to have a home-field feel to it. If we’re bringing in good teams like Mexico or Honduras we’re not going to Toronto and make them feel like they’re playing a home game. Vancouver’s a good choice for us right now.”

“If Vancouver’s bringing over 40,000 people, we’ll be playing in Vancouver again, I assume.”

Gustavo signed with the club in the off-season but his arrival has been delayed by paperwork issues. Coach Colin Miller said the team is simply waiting for the passport to clear and then Gustavo can officially become an Eddie. He said Gustvo might be a day or so behind the rest of the squad’s arrival in Saskatchewan, where the team will train later this week before heading to Scotland. The international paperwork could also mean that Gustavo will be a day or two behind the team in getting to Scotland.

PLASTIC PITCH. CHECK OUT OUR SHOPIFY STORE TO BROWSE OUR 8-ISSUE BACK CATALOGUE. CANADIAN SOCCER. CANADIAN STORIES. LOOK FOR OUR RELAUNCH THIS SUMMER!