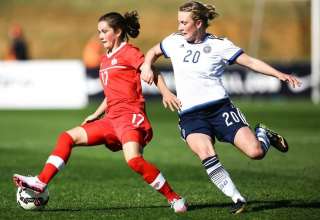 Canada’s national women’s team scored goals in bunches against CONCACAF minnows in the regional qualifying for the Olympics. Coach John Herdman’s teenage and twentysomething “mavericks” almost had us believing that Canada could shake its international reputation of being a team that’s challenged up front outside of Christine Sinclair.

But, after being shut out by the Americans in the final of the CONCACAF tournament, and then beaten 1-0 Wednesday by Denmark in the opener of the Algarve Cup, the questions remain. When the level of opposition rises, can Canada score?

And, with Sinclair limited by a bad back, it’s time for those mavericks to show that they can press without the No. 2 all-time scorer in women’s international soccer in the lineup.

Herdman lamented the fact that teenager Gabrielle Carle missed a golden chance near the end of the loss to Denmark. But he shrugged and said that she’ll learn from the mistake.

And that’s the issue with Canada. The women’s team is too good to really take any lessons from smashing up Caribbean and Central American sides, but not getting enough out of its games against top competition. It’s like Canada is in a limbo between the so-called “A” teams and the poorer sides.

“You come into this competition, it’s definitely a step up from the CONCACAF qualification,” said Herdman. “We played a Danish team that narrowly missed out on qualifying for the Olympics in a tough pool.”

Teenagers Deanne Rose and Jessie Fleming featured for Canada. Youngster Ashley Lawrence was at left back. Janine Beckie, just out of the NCAA, got another start in a forward position. It’s a young side, granted, but as the Olympics get closer, these young players will need to start carving out goals against teams with national anthems shorter than three minutes long.

“Same old Canada, we’re not scoring,” Herdman admitted. “When we get great opportunities. we’ve got to take them.”

“(It was) a little bit of a rude awakening. As the game got tougher, the players just seemed to suffer a little bit.”