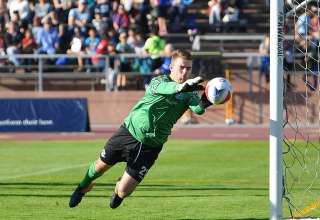 The Eddies will start on the back foot, and get stronger as the game goes on. But, there have been occasions where the team digs too big a hole for itself to climb out of. Last week, the Eddies trailed 2-0 at halftime to San Francisco, and ended up losing 2-1. It was a game that coach Colin Miller said could have seen the Eddies trailing by three goals within the first 15 minutes.

A couple of weeks ago, the Eddies were swamped early by North Carolina FC and never recovered.

Last week’s loss in San Francisco was just an extreme example of a trend in Eddies’ games. Even when the Eddies triumph, they grow into games, they don’t dominate right from the start.

“We’ve got good players here, but the attitude against San Francisco in the first half was not right,” Miller said after Friday’s training session. “The approach to the game was not right. We corrected one or two things at halftime and you saw an entirely different FC Edmonton team.”

Before Friday’s training session, the team went over the video of Saturday’s loss in the Bay Area, and Miller said the first half  “was a Rocky Horror Picture Show for some players.” The Eddies will look for a better first-half performance when the Deltas visit Clarke Field Sunday afternoon.

And the coach is clearly frustrated with the slow starts to games. He has no answer to what happens between team talk and the kickoff.
“I wish I could. We prepare properly. We know everything about the opposition, set plays and so on. The warm-up is good. The warm-up is intense and the guys are prepared for it. And we come in and we have another rah-rah talk and, unfortunately you have to wait for anthems and everyone to be introduced and it slows things down again, but that’s just making excuses. Psychologically, we have to be better. Individually, they (the players) need to be better. They could be focused on whether they start properly rather than leaving it to someone else.”

Keeper Tyson Farago is getting used to seeing action right in front of him in the early stages of games.

“It’s something we have to address, every practice and game we talk about it — let’s get on the front foot,” he said. “We have a little chat before the game, we have to pump each other up and get ready to go, sometimes that’s just the deal with football… We all have it in the back of our head. And we all have to just step it up. Mentally, we have to cancel all the mistakes and just really be on our front foot from the beginning of the game.”