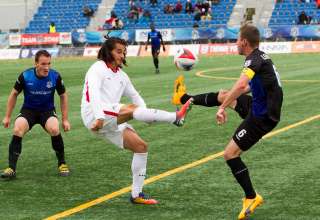 Give coach Marc Dos Santos and his San Francisco Deltas another heaping helping of adversity. Go ahead. Pile on the stress and uncertainty. They eat stress for lunch. Adversity? Meh.

Sunday’s 1-0 win in Edmonton was yet another example why the San Francisco Deltas continue to be one of the most compelling teams in North American second-division soccer. The expansion side has lost just once on the road this season and have the second-best record in the NASL. But, even before the NASL’s do-or-die bid for a U.S. court injunction so it can survive as a second-division league, there were questions if the Deltas would last any longer than one season.

Yet, despite the doubts and the potential distractions, the Deltas keep performing on the field.

Sunday’s win was a summary of San Francisco’s season — the game was played just hours after what Edmonton Police describes “terrorist” attacks in the area near Commonwealth Stadium/Clarke Field and downtown.

Dos Santos said his team was locked down in their hotel last night and remained focused on the task at hand, Sunday’s game.

The game was played in terrible conditions; with huge, gusting winds playing havoc with the ball. The Deltas had chances from Reiner Ferreira and Pablo Dyego go off the bar with the wind at their backs in the first half. But, they got the goal — a bullet header from Kenny Teijsse off a corner from Kyle Bekker — going into the wind, and right after keeper Romuald Peiser stoned FCE’s Sainey Nyassi on a breakaway chance.

When they were odds-on to score, the Deltas didn’t. When Edmonton had the wind advantage, the Deltas found a scrappy goal — and a sweep of the home-and-home set with the Eddies.

“The only thing we can control, me as a coach and them as the players, is the better we perform, the better chance we have to be in another club next year or with the San Francisco Deltas,” said Dos Santos. “If San Francisco continues, good. If it doesn’t, and we do well, hopefully we’ll all have jobs in 2018.”

Defender Karl Ouimette started along with Bekker, giving the Deltas plenty of Can-con, with Maxim Tissot coming in as a late sub.

Bekker had a couple of dangerous free kicks just miss the target in the first half, and was a constant threat from midfield. The former Toronto FC and Montreal Impact man has shown well with the Deltas whenever they’d made trips north to Edmonton.

“We tried to help him a lot,” said Dos Santos. “I can’t judge Kyle on the other coaches that worked with him. My focus is to help Kyle as a coach on what he does with San Francisco. I think that Kyle could even become a little bit better. Kyle, sometimes, is a little bit inconsistent but when he’s at his best he can make a difference. He’s very good with both feet and sometimes you wonder if he’s a right-footer or a left-footer. Sometimes in training he takes corner kicks with the left foot and in a very natural way with a lot of quality.”

Because San Francisco has so many “heavy” targets (Dos Santos used the “heavy” word), having someone like Bekker delivering the kicks into the box is vital for the team.

With the wind at their backs in the second half, the Eddies had a couple of great chances to score, but Peiser dove to stop a swerving free kick from Daryl Fordyce and then made the save when Nyassi took a pass from Jake Keegan and streaked down the field.

FCE coach Colin Miller said that he couldn’t fault his players’ efforts, but that “it felt like every break went San Francisco’s way.”

Miller tried to light a fire by giving teenager Abraham Dukuly his professional debut late in the second half. Dukuly’s first touch brought a roar from the fans who decided to brave the cold, blustery conditions.

FCE captain Nik Ledgerwood said the Eddies, nine points out of a playoff spot, need more from their final six games of the season.