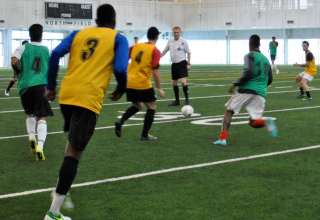 Former Toronto FC forward Keith Makubuya is confident that he can extend his stay in Edmonton for longer than the scheduled 72 hours.

Makubuya was chopped by TFC at the end of a frustrating 2012 season. And, even though the TFC Academy prospect was part of the big club’s roster this past season, he didn’t see any game action. On Wednesday, he joined 29 other invitees and members of the FC Edmonton reserve squad at Commonwealth Stadium’s indoor field — all looking for a chance to be invited to FC Edmonton’s training camp in 2013.

Makubuya participated in scrimmages on Wednesday — day one of the three-day combine.

“I have to move on where I can get more minutes; I need the playing time,” Makubuya said at the combine.

And he didn’t hide his frustration on how things panned out with TFC. For him, what was frustrating to watch was the team continue to lose, be mathematically eliminated from the playoffs with weeks left in the season, yet coach Paul Mariner didn’t give his Academy prospects like Makubuya and Cordon the chance when, in fact, there was nothing to lose by playing the Canadian kids.

“That’s what made it so frustrating,” said Makubuya. “If we were losing, why not give us a chance to play? But it is a business, and that is how it goes. But it was tough on a lot of us.”

FC Edmonton fullback Dino Gardner, who came to the Eddies after leaving TFC Academy, recommended his new club to Makubuya.

“He said it was a great place to come to,” said Makubuya. “He said he was really enjoying it here. The opportunity came up to play in Canada, and this is my first option right now. I hope to get the chance to play here.”

Coulton Jackson, who scored five goals and added three assists for the Vancouver Whitecaps’ U-23 PDL side in 2012, was offered the opportunity to return to the Caps in 2013. But he turned down the offer and decided instead to come to camp.

“They (the Whitecaps) offered me a contract, but it was not what I was looking for,” said Jackson. “It was not enough money to live on.”

And Jackson, like many of the prospects on day one of camp, had to deal with jet lag and tired legs. Jackson is back in Canada after a spell in Europe. He spent time at an Italian academy, and trialed for Belgian second-division side KFC Dessel.

This marks the second time Jackson has auditioned for the Eddies. But, with a new coach, Colin Miller, judging the talent, he is likely going to get a more thorough look-see this time around. Of course, as a former Whitecaps assistant, Jackson is a known commodity to the new FCE coach.

But, if it comes to a choice between European trials or the chance to play in his home country, Jackson knows what he will choose.

“The number one choice is to play in Canada. It would be nice to play close to home.”