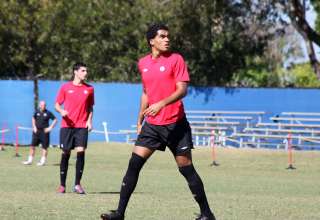 Thanks to the Twitterverse, we can confirm that Canada’s U-20s have enjoyed a successful road trip to Costa Rica.

Two goals from Vancouver Whitecap Caleb Clarke supplied all of the offence that coach Nick Dasovic’s charges needed, as Canada beat the host Costa Ricans by a 2-0 count.

Clarke was brought up the Whitecaps’ senior squad last season and his, sister, Summer Clarke, was one of the stars of the women’s U-17 team.

If Canada, as expected, wins its group at the U-20 CONCACAF Championship to be held in Puebla, Mexico, it will likely have to face Costa Rica in the first knockout stage. Costa Rica is in a group with the United States, and the second-place finisher in that group would face the winner of Canada section in the next stage.