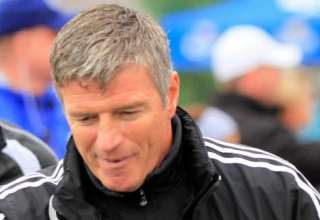 Last Saturday, FC Edmonton coach Colin Miller was in front of the television, watching the Vancouver Whitecaps take on the Seattle Sounders.

In the second half, when Whitecaps’ central defender Andy O’Brien left the match with a suspected — and later confirmed — hamstring problem, Miller was waiting for the phone to ring. He had central defender Carlyle Mitchell on loan from the Whitecaps, and knew that the Trinidad and Tobago international would soon be going back Vancouver.

“As soon as I saw the big guy (O’ Brien) go down, I knew that would be the end of Carlyle for us,” said Miller.

With centre backs O’Brien, Brad Rusin and Jay DeMerit all on the shelf, and Alain Rochat — who was able to play centre back in a pinch — traded to D.C. United, the recall was made.

“We have a very good, very positive relationship with the Whitecaps,” said Miller. “The agreement was that Carlyle would be spending the season with us here in Edmonton, the only exception to that would be if the Whitecaps found themselves in dire straits. Well, they are clearly in dire straits at the moment.”

FC Edmonton will now have to cope without Mitchell and central midfielder Chris Nurse when the club hosts former Eddie Paul Hamilton and the NASL-leading Carolina RailHawks on Sunday. Mitchell hadn’t played since May 26, when he sprained his ankle against the Fort Lauderdale Strikers. Nurse saw yellow twice in last weekend’s draw in Atlanta.

Miller wasn’t telling when he was asked how he’d fill the two holes. He used Scottish veteran alongside Albert Watson in the centre of the FCE defence last week. He can also call upon Mallan Roberts or Adrian LeRoy, who have both started NASL and Amway Canadian Championship matches this season, to fill in at centre back. Proctor can also play in the midfield, or he can bring another midfield option of the bench.

But, with FCE trailing the RailHawks by five points in the NASL spring-season table – and with the Eddies having just three games to go — Sunday is a must-win, and Miller didn’t want to show his hand.

“We still have four NASL-quality starters available to play centre back,” said Miller. “The situation is not desperate for us. We have built a solid foundation here.”

But Miller is worried about Mitchell. The defender was only back to doing light jogging when he was recalled by the Whitecaps. Had he still been in FCE camp, Miller admitted that the defender would have been “doubtful” for the RailHawks game. So, he’s concerned that Mitchell won’t be at 100 per cent if he’s forced to play Saturday for the Whitecaps against New England.

“I want to see what’s best for Carlyle.”