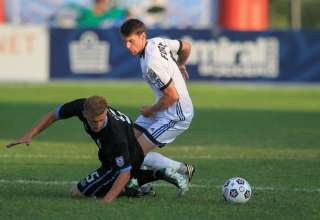 Fordyce had scored in each of the team’s last two games of the spring season, as the Eddies showed signs of waking up from the club’s offensive slumber. The Eddies scored the fewest goals in the league in the spring season, which led to a fifth-place finish despite boasting the best defensive record in NASL.

But, as the season wound down, Fordyce was playing his best soccer of the season, and coach Colin Miller said if there was a player in NASL in better form at the time, he hadn’t seen him. (Of course, it would be poor to ignore the late-season scoring exploits of San Antonio’s Hans Denissen, who finished joint top-scorer in NASL thanks to a June surge).

Now, Fordyce has to cool his heels for a month till the fall season starts in the first weekend of August.

“It was just as I was starting to get going,” said Fordyce of the break. “When you get in a good routine, you don’t want it to end. But, for the three of us (Fordyce, Robert Garrett and captain Albert Watson, who all came to FCE from Belfast’s Linfield FC), it’s the first break we’ve had in a year. It was June of last year that we started training camp, went six to eight weeks, then the start of the season. In Northern Ireland we play a lot of Saturday-Tuesday-Saturday-Tuesday. And then we came here, and right into training camp. So it’s good to have this break for us.”

Early in the season, Fordyce had an uncanny knack for hitting the woodwork. And he admits that it got to the point where he was frustrated. He took a week just to think the game through, to assess why he wasn’t having the impact on the games that he wanted to have. He realized he needed to do the things that would give him another half-yard on the defenders who were marking him.

“I had to start doing the things I am good at,” he said. “It’s important, as a player, to play to your strengths. You work on your weaknesses in training. But, when the game comes, you have to focus on your strengths.”

Fordyce said he’s never played in a league that can boast the parity of NASL.

“It’s normal to see two or three teams in the battle for the championship, three or four in the relegation battle,” he said. “But in this league, anyone can beat anyone on any given week.”

Knowing that, he thinks FCE can quickly make the adjustments to becoming a contender.

Fordyce, Watson and Garrett will all likely be watching their old club try to finish off Greek side Skoda Xanthi in Europa League qualifying. That second leg will go on Thursday. Xanthi just signed Canadian Julian de Guzman, and has to overturn a 1-0 home defeat to Linfield.

Linfield will have home advantage in the second leg, but Fordyce doesn’t want to jinx his old club by making a prediction.

“They were very well organized in the first leg. They stopped the Greeks from playing and, once they did that, there was nothing for them to do. It was a great result.”

IN CAMP: As FC Edmonton kicked off a week of pre-fall-season training at Clarke Stadium, one new face and one notable old face were in the crowd.

Training with the club were David Zaharija and Dominic Oppong. Zaharija, as reported Monday (CLICK HERE), comes to Edmonton from Croatia SC of the Vancouver Major Soccer League. In 2010, he played lower-division soccer in Greece but knee issues derailed his attempts to stick in Europe.

Oppong was a member of FC Edmonton under then-coach Harry Sinkgraven in the team’s first two NASL seasons, but was released after the 2012 campaign.

“He’s just here for the week,” said Miller of Oppong’s return to FCE. “Nothing is promised, he is here to work out. We’ll have a look, but it (holding mid) is a position we’re not really looking to strengthen at this point.”

Zaharija is also getting a look, but he’s a No. 10-type player, and that’s not a spot Miller’s in critical need to fill, either. But the player was recommended to Miller by national U-20 coach Nick Dasovic, so he’s in Edmonton for the week to show what he can do.

KNIGHT DELAYED: Wes Knight had been hoping to get the all-clear for the fall-season opener in Carolina (CLICK HERE). But the frustrated defender/midfielder ran into a snag — the Canadian health-care system.

Knight broke off his foot in an April road game in Minnesota, and has been sideline since. But the foot has healed to the point where he had expected to get an all-clear from his surgeon last week.

Instead, he found out the doctor was out of the province on a medical matter. And, he was told he needed to get a sign-off from that doctor in order to get the all-clear to play. He wasn’t able to take his x-rays to another physician to get the signature.

So, when Canadians complain that professional athletes often get to jump the lines in order to get treatments, they can feel comforted in the knowledge that the same doesn’t apply to NASL players. Because Knight has to wait until Aug. 2 to get his clearance, he’ll definitely miss the fall-season opener at Carolina.