December 08, 2022
9 New Articles
Home NASL & USL FC Edmonton FCE at Carolina: Fisk could go for fourth goalpost in a row, but a goal would be a lot better 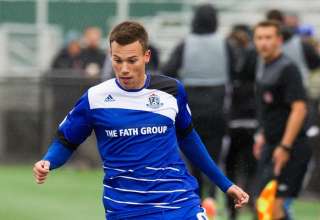 Do you think it’s possible to make a prop bet on a player hitting the woodwork four games in a row?

Because FCE winger Ben Fisk is at three. In the Eddies’ last three matches — two draws and loss — Fisk has beaten the keeper, but not been able to get his first NASL goal.

“I think I’m getting in the right areas, so I’ve just got to try and keep my confidence high,” said Fisk, the Canadian who was started on the left wing over the course of the last three FCE matches. “I’ve had some good shots, I’ve been a bit unlucky not to score two or three, so I’ve got to keep getting in the right area and try to keep getting real service from my teammates and the goals will come.”

But Fisk, the former Whitecap who was signed by the Eddies early in the fall season, has looked good in creating those chances — and he knows he can’t let the regular hitting of posts keep him from continuing to try his luck.

“I’ve probably never hit the post three games in a row in my life,” he said. “The goals are coming… I think I am a guy with a lot of self confidence so, when I get in those, whether I’m skying it 20 feet over the bar or hitting the post, I’m gonna keep shooting.”

Fisk spent an injury-plagued 2013 season on loan from the Whitecaps to the Charleston Battery. So, when he and the Eddies travel to North Carolina to face the RailHawks, he’ll be in somewhat familiar territory — the Battery and RailHawks faced each other in exhibition play when Fisk was there. And the RailHawks still have some connections to the Whitecaps that date back to when Martin Rennie first coached in Carolina and then moved to Vancouver. Fisk is a former Whitecap colleague of both RailHawks keeper Brian Sylvestre and Matt Watson. So, even years after Rennie has departed, there are still connection that tie Vancouver and Cary, N.C.

What Fisk and his teammates will have is time to prepare. In the past, trips to Carolina have been marred with delayed flights, bad transfers and early morning arrivals. But, with the Eddies in contention for the the fall season title — currently five games behind the Cosmos with a game in hand — the team will get to Cary on Thursday, giving the Eddies a full training day in North Carolina on Friday, before Saturday night’s match. The Eddies will also carry 18 players on the trip— rather than the usual 16.

“[Owners] Tom and Dave Fath deserve the credit for that, they’ve been so supportive whenever we’ve required anything,” said FCE coach Colin Miller.

“I think it’s massive. We know that it’s massive. The players appreciate the extra day, I know it’s an incredible expense to the club, but Tom and Dave have been so supportive of anything we’ve needed. There have been times when we’ve left here and I’ve picked [assistant coach] Jeff Paulus up at three in the morning and we’ve not got to the hotel until seven or eight that same day, at night.”