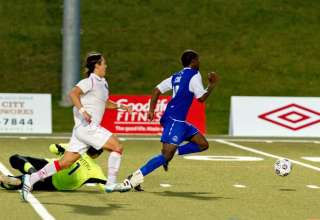 Michael Cox in action against Atlanta

On our NASL game broadcasts for Edmonton sports station TEAM 1260 and fcedmonton.com, play-by-play man Gareth Hampshire, myself and our crew have referred to our player of the game honour as the Paul Hamilton Award.

We’ve given him the player-of-the-game honour so many times, it’s almost surprising when we pick someone else. Hamilton is right now the best Canadian defender playing on any of the Canadian teams — and, yes, I’m including the MLS clubs.

On Monday, Hamilton was recognized as the NASL defensive player of the week for his steady performance in FC Edmonton’s 3-0 win over the Atlanta Silverbacks Sunday.

Ironically, on that night Hamilton wasn’t named our man of the match — that nod went to striker Michael Cox who, in his second start of the season, put up two goals. On both occasions, he rounded Atlanta keeper Felipe Quintero to score into open nets. On both occasions, he mad great runs that saw him blow past the Atlanta backline.

For Hamilton, it was just another game. He was regularly the first person to get a head on any corners, throw-ins or long lobs played into FC Edmonton’s back line. It’s pretty well the performance we’ve come to expect from the centre back.

FC Edmonton is home to a large contingent of Calgary-born players. Both Hamilton and Cox are in that group. And they will play a large part in the six remaining regular-season matches, as FCE tries to consolidate its playoff position in its first year of Div.-2 soccer.