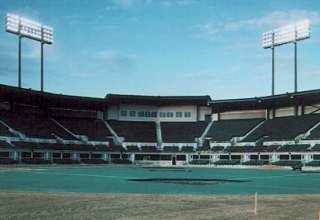 Telus Field: One of the sites identified for a new soccer stadium

FC Edmonton will once again be delaying the announcement of where it will play its home games in the 2012 season.

The team confirmed that plans for an early-March announcement on the team’s stadium are now off. The team, and many of its officials, will head to Arizona in early March for training camp, so that also complicates matters.

The team confirmed that the unveiling of the club’s new Adidas home and away kits won’t happen until after the team gets back from the March Arizona camp.

The timing of the announcement of the delay is indeed intriguing. FCE looked to be on course to announce a venue, which was believed to be Clarke Stadium, which has a capacity of 800-1,200 and would need to be expanded to house NASL games. Clarke Stadium is right next door to Commonwealth.

The club won’t make any statement on venues, other than it has yet to sign off on any commitment for a new home.

But, on Tuesday, Edmontonians found out that Telus Field, which seats 9,000-10,000, will not host pro baseball in 2012. The minor-league Edmonton Capitals announced that they would not compete this season, and that the club was looking for a new league in which to play, hopefully by the 2013 season.

With a stadium and adjacent parking area — located close to downtown — now looking for tenants, is Telus Field now in play? FCE is keeping quiet, but the timing of FCE’s delay is intriguing. Telus Field already has the infrastructure not only to be a temporary home for soccer, but could be a possibility for a permanent soccer stadium.

Edmonton Mayor Stephen Mandel has stated his support for a soccer-specific stadium for FCE, a venue of 10-15,000. Late last year, when the mayor met with FIFA officials to discuss the city’s preparedness to host the 2015 Women’s World Cup games, a soccer stadium was a topic of conversation.

The club played its inaugural NASL campaign on the hard artificial surface of Foote Field, a venue that was disliked, by fans and players.

“It was hard to play on such an odd field,” said FCE goalkeeper David Monsalve Wednesday. “There were so many odd bounces. And training on it was a problem. When you trained on that kind of odd field, you get used to it. You get used to the bounces. Then, when you go on the road and play on grass, being on a proper field seems strange. You actually have to get used to playing on grass again.”

With no work being done on any venue at the moment, and the home schedule kicking off in late April, fans will also wonder if a new temporary venue would be ready in time. FCE didn’t comment when asked about the possibility of starting the season at Foote, then moving to another venue later in the campaign.

The NASL schedule has already been released, so FCE has committed to its home dates.