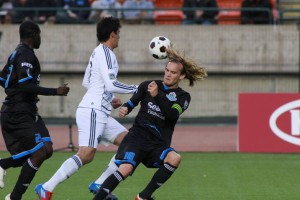 FC Edmonton announced Tuesday that the Calgary native will not be with the club for the 2013 season.

“Paul Hamilton has been the perfect ambassador for our young club, but with the changes to our coaching staff, he wasn’t fitting in to our future plans,” said technical director Joe Petrone in a release issued by the team. “On behalf of the club, I want to wish Paul Hamilton all the best in his burgeoning soccer career.”

Hamilton spent much of the 2012 season as the only natural centre back on the Eddies, and was often paired with converted midfielders or fullbacks. But, his work was recognized around NASL, and he was the only member of the last-place Eddies to get a season-end award nod. He was the only Canadian on the NASL Best XI.

But, new coach Colin Miller made it a priority to rebuild the back line, and has maintained that there are no guarantees on a team that finished last in the league in 2012. Former Northern Ireland U-21 captain Albert Watson is now the team’s new captain, and young prospects Chris de Guise and Mallan Roberts are seen as central defenders of the future. Carlyle Mitchell was brought in on loan from the Vancouver Whitecaps. As well, Miller can also use 2011 NASL Best XI left back Lance Laing in the middle, and Canadian defender Eddie Edward can slot in there as well.

Hamilton had remained in camp, working out with the Eddies without a contract. He decided to focus on his work on the field and declined making statements to the media. He did make a statement through FCE on Tuesday.

“I very much enjoyed my time playing for FC Edmonton and wish nothing but the best for this club. Unfortunately I was not in the plans of the organization moving forward and therefore I am moving on to the next chapter of my career,” Hamilton said. “I want to thank Tom Fath and the whole front office staff for everything they’ve done for me. I wish the club many years of success and hope that the City of Edmonton will continue to help this club grow.”

Hamilton is a now a free agent.