September 25, 2022
9 New Articles
Home NASL & USL FC Edmonton FC Edmonton has week and a half to prepare for Whitecaps clash 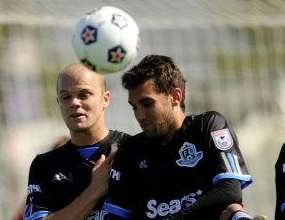 If a looming Amway Canadian Championship semifinal against the Vancouver Whitecaps wasn’t enough to get the minds of FC Edmonton’s players off of Sunday’s crushing 4-3 defeat to Minnesota, two training sessions on the same day in blustery 4C temperatures did the trick.

After the second training session wrapped up, FCE’s players were far more interested in talking about the big game next Wednesday at Commonwealth on Wednesday than dwelling on the last-gasp goal that gave Minnesota a 4-3 win over the Eddies in Sunday’s Clarke Stadium NASL home opener. Well, that and getting somewhere warm.

“It was disappointing to lose the way we did,” said midfielder Shaun Saiko, who scored for FCE and set up two other goals on Sunday. “We scored three goals, but we conceded four. But we are excited about next Wednesday, the chance to show all Canadians what we are about.”

Saiko sat out practice with what he called a minor toe problem, but expects to be at 100 per cent by the time the Whitecaps come to town.

The NASL schedulemaker gave the Eddies a break, as the team has this weekend off, giving it a week and a half to focus on Vancouver. Meanwhile, the Whitecaps have to head to Columbus Saturday, then head back to Vancouver for training Sunday and Monday before heading east across the Rockies to face FCE for the first time ever.

Wednesday afternoon’s training session saw David Monsalve back in net for Edmonton; the Canadian keeper has missed the first four games of the NASL season due to a sprained ankle. Monsalve said after training that he is ready to go and could play next Wednesday, even though coach Harry Sinkgraven hasn’t told any of his four keepers who would get the nod for next week’s game. Michal Misiewicz, who was excellent in the first three Eddies’ games of the season, struggled in the 4-3 loss and was directly responsible for the second goal, which saw him spill a free kick that was deposited right back in the net.

“For me, it’s just a matter of getting rid of the rust,” said Monsalve. “I just have to clear up some things in my game, after being off for a month.

“As for the last game, we can still take a lot of positives from it. To lose like we did, in the last seconds, that’s a hard way to lose. But now we have to be ready for the most important game in this club’s history so far. This is why I play the game. In this league, you don’t always get to play in front of the biggest crowds, so this is a great chance to play in front of a bigger audience. I was lucky that I got my FC Edmonton debut in Montreal last season, and in front of 12,000 fans? Again, it’s why I play the game.”

While Edmonton hasn’t had any formal sessions that focus on what the Whitecaps will try and do — Monsalve and many of his teammates have been watching Vancouver’s MLS games when they can.

But Saiko said if an upset is in the cards, it will be because the Eddies succeeded in playing its ball-possession game, not because it spent two legs trying to adjust to the Whitecaps physical style. And while the Whitecaps boast offensive power in Sebastien Le Toux, Camilo, Eric Hassli and Davide Chiumiento, Edmonton can’t lose its own identity in trying to match the one of the largest payrolls in MLS.

“We know what Vancouver brings, it’s an MLS team,” said Saiko. “But we have to do our own thing. That’s the way we have to approach it.”