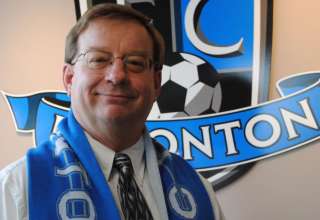 FC Edmonton has confirmed that owner Tom Fath and its brass met with city officials Wednesday to discuss a new venue for the NASL club to call home.

“We were in contact with the City about 24 hours ago,” said FCE general manager Tom Leip on Thursday.

“We are trying to build a relationship with the City, and are encouraging a bigger discussion than on just where we are going to play next year. Our goal is to have a facility for us not only to play in, but to host player development, where our academies can play, that can be used for both the 2014 (U-20 Women’s World Cup) and 2015 (Women’s World Cup) tournaments. We want to have a facility that we can share with other clubs, with the Alberta Soccer Association.”

And has the topic of a new FC Edmonton opening a new stadium to some kind of partnership with the Canadian Soccer Association been discussed? It sure has. Not in detail, but the topic has been broached.

“It’s not that it’s never come up with the CSA,” said Leip.

When FIFA officials were in the city a few weeks ago to inspect Commonwealth Stadium and various practice facilities ahead of the 2014 and 2015 tourneys, Mayor Stephen Mandel said that he wanted to develop a partnership with FC Edmonton, to help find it a new 10-15,000 soccer-specific stadium it could call home — and could also be used for various community events.

This past season, FC Edmonton played at Foote Field, which belongs to the University of Alberta. It featured old-style, hard artificial turf with Canadian football lines. And, because FCE wasn’t a prime tenant, it didn’t get a great selection of dates from which to choose; so the club didn’t play many weekend afternoon matches.

FC Edmonton hasn’t committed to Foote Field for 2012; acutally, it hasn’t committed to any venue yet. Clarke Stadium, which is located right next to Commonwealth and is steps from Stadium LRT station, has been discussed. But it would require work to make it NASL ready, as the grandstand only holds 800 people. Could that eventually be a site for a permanent stadium? It’s too early in the discussions to say.

Leip said that the Clarke site and the Foote Field site both remain options, and he is waiting to see any other sites that would be suggested by the city. And, while he admits to being “impatient,” he said that FCE recognizes the best option is to work calmly with Edmonton politicians. They know the 2014 U-20 Women’s World Cup is coming up, fast — as is the big one in 2015, the Women’s World Cup.

But an FCE partnership with the Canadian Soccer Association — in any form — would be interesting.

Why? The federal government paid $27.2 million of the $62.9 million that was needed to construct BMO Field. The money was earmarked for BMO Field because, under the agreement between the City of Toronto and Maple Leaf Sports and Entertainment, which manages the facility, the Canadian Soccer Association has rights to use BMO Field for six dates every year. As well, the facility was the jewel in the crown for the 2007 U-20 World Cup.

But, despite the contribution from taxpayers in the building of BMO Field, the CSA pays rent for the facility, which Maple Leaf Sports and Entertainment confirmed earlier this year comes in the form of revenue-sharing at the gate.

So, federal money went to pay for nearly half of BMO Field’s construction, yet the national soccer teams, which are, when you get down to the nitty gritty, federal government departments, still pay rent to use the stadium.