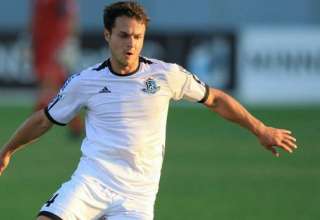 Antonio Rago: Praised by his coach

The draw came in the wake of Wednesday’s 2-0 loss to MUFC, as both teams regroup and prepare for the NASL fall season, which kicks off the first weekend of August.

But Saturday’s match was more informal than Wednesday’s tilt. The second match of the week was played behind closed doors, with MUFC using a trialist-heavy lineup. FC Edmonton held midfielder Shaun Saiko and Neil Hlavaty out of Saturday’s match because of minor injuries.

But coach Colin Miller was pleased with the Eddies’ effort. The best chances of the game fell to defenders Mallan Roberts and Antonio Rago.

“Mallan Roberts had two or three chances from inside the box, open headers and a couple were put into the keeper’s chest,” said Miller. “Antonio Rago hit the post. I think they had two shots on goal for the entire game. I thought, overall, we did very well.

Roberts scored his first-ever professional goal on a headed effort in the final game of the NASL spring season, a 3-1 triumph over Minnesota.

And there were others that Miller singled out for praise.

“(Teenage midfielder) Hanson Boakai did well, as did Edem Mortotsi, he almost went a full 90 minutes. And Antonio Rago did very well, as he has all week at camp.”

Miller has already confirmed that an attacking midfielder will be signed and will debut with FCE in early August. He’s also hopeful a new trialist will be in camp next week when the team returns to Edmonton, and he’s still working the phones with MLS clubs about loan possibilities — anything to help shore up an attack that was at the bottom fot the NASL’s spring charts in goals scored.’

“Definitely, it’s been beneficial, to have the guys all together in the same hotel. It hasn’t been an intense week, but a couple of the training sessions have been intense. We’ve been working on attacking and keeping possession of the ball. But at this stage, it allows the players to bond with each other.”