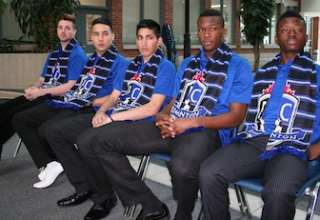 At just 16 years of age, Hanson Boakai has just became the youngest player signed to an NASL team.

The midfielder was one of five reserve players who officially made the jump to the big club, as FC Edmonton announced the signings of Boakai, defenders Mallan Roberts and Chris de Guise, and forwards Sadi Jalali and Ajeej Sarkaria. (Jalali’s signing was public knowledge last month.) The announcements were made at a media event held at St. Joseph’s High School, which partners with FCE to help its residency players balance education and soccer.

Boakai, though, is the youngest of the five.

“So far, it’s the biggest step of my life,” said Boakai, a slick midfielder who is known for being very good with the ball at his feet. “And, obviously, it will help me with the national team, qualifying in April.”

Boakai, of course, is referring to the national U-17 team, in which he’s expected to play a major role. And, in his mind, nothing will help him prepare for CONCACAF qualifying like being able to train with players who have played for Canada at various levels, such as Shaun Saiko, Edmonton’s star midfielder, or Jalali, who started at striker for the U-17s in the previous cycle.

And Boakai, like all the reserves, had been training for the past few months with local products Saiko and Antonio Rago at the Commonwealth Fieldhouse. He also had the chance to play against local star Tosaint Ricketts, who scrimmaged with FC Edmonton while he was home for the holidays.

“It means a lot,” said Boakai. “These are players I used to watch and look up to. To get to play with them is a real privilege.”

Colin Miller, FC Edmonton’s new coach, has deemed that all the team’s returning veterans must go to “trialist” status and prove that they should keep their jobs. And he has told the young prospects that if “you’re good enough, you’re old enough.” Boakai knows that Miller began his pro career as a teenager, when he debuted with the Toronto Blizzard of the NASL back in ’82. So, if there’s anyone who would have no problem starting a teen in a pro game, it’s Miller.

Jeff Paulus, FCE’s assistant coach and the coach of the reserves, also had de Guise and Roberts at NAIT, where he won a national title two years ago. He said de Guise, who might be the biggest unknown of the five to the Canadian soccer fan, has made great strides and can place 40-50 yard diagonal balls with pinpoint accuracy.

He said that Wednesday’s signings were historic; that these five players marked the first realizations of the long-term development strategy. The players came from the clubs to the residency level, and have graduated to the pro stage.

“We want to drip-feed these young men into our first-team environment and, hopefully, get them into our first team as quickly as possible,” he said. “In the first team, there will be massive changes, but there always will be a continuing influx of Canadians into the first-team group.”