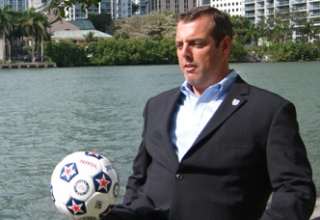 Fifteen candidates were screened by the NASL’s search team — but the choice was made to make former AEG executive and NFL Europe president Bill Peterson the league’s new commissioner.

The announcement was made by the league Tuesday at almost the same time as new FC Edmonton coach Colin Miller was introduced to the media in the Alberta capital.

Peterson has varied experience in the sports business world. Not only was he the general manager of NFL Europe’s Amsterdam Admirals, but he is the chairman of the USA Cycling board of directors and was a senior vice-president of AEG Sports and managing director of the Home Depot Center in Carson, Calif., from 2000-2006.

FC Edmonton owner Tom Fath was on the search committee, and said Peterson will be able to walk into the commissioner’s job without too much transition time. David Downs announced earlier this year that he would be stepping down as commissioner.

“Bill is very well versed in working with sports bodies and board and other sports organizations, which is something the commissioner has to do. He will be able to work with the various associations.

“He believes that your league is only as strong as your teams.”

Fath confirmed a number of the 15 candidates had come from overseas, but the search committee felt it was important to hire a North American.

“We wanted a North American, someone who understood our sporting landscape.”

“There is an opportunity here to cement the NASL as a league that can thrive and expand while providing compelling soccer for the game’s fans,” Peterson said in a release issued by the league. “The roots of the NASL triggered a soccer explosion in North American in the 1970s and I am delighted to be leading this new chapter as we take the league and its teams forward into an exciting future.”